Be sporting -- visit the zoo!

Ya'all know by now that I have to throw in a zoo post every once in awhile. There has been a nice baby boom this year, which means lots of adorable animals that won't stay small forever including Sumatran tiger cubs, a waterbuck calf, a giraffe calf, Chilean flamingo chicks, and a baby gorilla. And, of course, little Po the panda won't be a year old until November. If you aren't spending the Labor Day weekend at Dragon*Con, please follow the link to view this update and promotion from ZooAtlanta:

Basically, you get discounted admission if you show up this weekend wearing your collegiate logo apparel and remember to ask for the discount at the ticket booth.

Plus, the Sumatran tiger cubs, Sohni and Sanjiv, will debut. You can see for yourself whether or not they match Po the panda on the cuteness meter.
Posted by Jolie No comments:

I'm pleased to present the finished Serpent of Eternity socks: 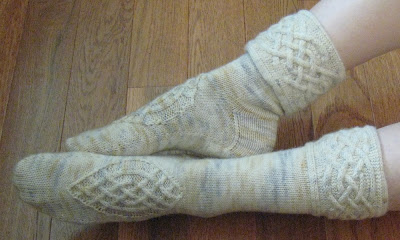 The origin of the design lies with Jenna Beegle, i.e. JennaB or Jenna the Yarn Pimp. As mentioned in a previous blog post from far too long ago, Jenna designed both the yarn and this sock with a horizontal cuff using the Saxon Braid. The original sock pattern was for the January 2010 sock guild at The Whole Nine Yarns. In Jenna's design, the cuff is worked horizontally, then, if I recall correctly, stitches are picked up and the sock is knit downward. I believe Jenna also picked up and added a little ribbing at the top.

I liked Jenna's design very much, as well as the hand-dyed yarn she designed. So I wanted to knit my own pair, but I wanted a couple changes.

First, I wanted the cuffs to be reversible. Sock cuffs are sometimes worn up and sometimes down, and I wanted that to be an option. (You'll notice I have one cuff down and one up in the photograph.) I spent much of last summer and autumn working out the technique for knitting traveling cables reversibly. And I succeeded in making two cuffs.

Then I decided I wanted some motif or detail on the instep. I wanted a design element that would tie the socks to the cuffs in a logical way. So I spent more time in the winter and spring swatching a version of the Saxon Braid that could be used as a stand-alone motif. I also came up with an alternative way to work a left cross and a right cross, after I realized the pattern needed some way to integrate with the stockinette fabric on the sock. So there were several technical and design challenges along the way. This was definitely a case where I had to up my game as a knitter in order to bring my vision into reality. I do hope to eventually post some video and pictorial explanations of these techniques.

After working the cuffs -- which required cabled double-knitting and grafting the double-knitting -- I cast on at the toes using a variant of Judy's Magic Cast-on. I worked both socks at the same time from opposite ends of the skein. I used Cat Bordhi's method from New Pathways for Sock Knitters. In this case, I worked double-increases at the sides every-other round to shape the toes. Then I went immediately into the Saxon Braid motif and increases at the sides of the sock every third round to shape the arch expansion. After the plain heel turn -- again following Cat Bordhi's directions -- I knit insouciantly in the round up the leg until I was nearly out of yarn. I do love the New Pathways method for toe-up socks, which is why I continue to teach it.

At this point I divided the yarn. I joined leg to cuff using a Kitchener seam. The legs are 60 stitches and the cuffs present 96 stitches, so it was a case of joining 5 sock stitches to every 8 cuff stitches. In the photograph, you can see how I used pins to mark each group. The rhythm was 2-1-2-1-2. In other words, the first stitch of the leg is joined to two ladders in the cuff. The second stitch is joined to one ladder. The third stitch is joined to two ladders, the fourth one, and the fifth two. Then you are at a new group and you start the rhythm again. I should add that in the photograph, the cuff should be rotated just a little more to the right so that the curved central part of the braid lines up with the center of the sock. I did place the cuff graft at the back of the sock.
Posted by Jolie 3 comments: