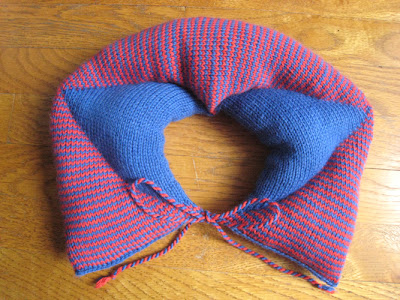 I thought I'd have a little fun with one of my own patterns. This little travel pillow is just two repeats of the Serpentine Short-Round Scarf. You have to stuff it as you work, because once you've closed the section, you can't easily get back in to it. I was initially going to work 3 repeats, but it was large enough to fit around my neck at only two. Another variation would be to use a provisional cast-on, work four repeats, and graft end to beginning to produce a doughnut pillow. Such a shape could be folded in half for the neck pillow, but would also be good for sitting during long trips. I used less then one skein of red but, alas, just barely had to break into the second skein of blue. Also, I dropped down to a 3.5mm /US 4 needle so that the fabric would be dense enough to keep the polyester fiber fill from showing through or sneaking out.

Because the information isn't in the pattern, let me tell you how I made the tie cords. They are cable-plied. For each cord, I cut one length of blue and one length of red, about a yard long. Using a blunt tapestry needle, I threaded both strands through the last chain stitch at the corner of the pillow. I pulled the yarn ends even. In this way, I didn't need to figure out how to weave in ends on an already-finished pillow. Holding both ends of the red together, I twisted them opposite the direction of the ply twist until there was plenty of built-up twist. I then held the red in my teeth while I twisted the blue. Then I brought them both together and twisted them in the opposite direction to make them ply together. I could have made a kumihimo braid or an i-cord, but this is fairly quick and I am hopeful that all the layers of ply twist will give the cords enough strength to wear well.

By the way, I made this very Atlanta-appropriate by choosing red and blue. I think the triangle-motif and the colors very nicely coordinate with Atlanta-based Delta Air Lines.
Posted by Jolie 1 comment:

How Do I Get a Class with Toshiyuki Shimada?

I know I haven't blogged enough lately, or knitted enough.  And way too much of my Ravelry projects page is filled with secret projects, sans pictures. I am still experimenting both with labyrinth knitting and with double-knit traveling cables.  I showed off the double-knit cabled sock cuffs at STITCHES South, and Gayle Roehm was kind enough to send me on a hunt for Ideas for Double-sided Knitted Scarves by Toshiyuki Shimada.  I was able to find it on Amazon, and it cost about $33 with shipping.  Fortunately, my sister had given me a $25 Amazon gift card for my birthday. The book shipped directly from Japan, and I was pleasantly surprised that my 25 April order arrived on 11 May, significantly before the 20 May to 13 June expected delivery date.

Can I just say up front that I now hold Toshiyuki Shimada in the same category as Cat Bordi, Lucy Neatby, Lynne Barr, Norah Gaughan, Debbie New, Kerry Ferguson, Kate Gilbert, Merike Saarniit, and Elizabeth Zimmermann? And I continue to miss Bruce/Scenter, and not just because he was learning to read Japanese. Truth be told, you don't have to read Japanese in order to follow the patterns.  The Japanese use the same Arabic numerals we use in the West. And the patterns are all explained with charts and graphs. In fact, the Japanese charting system is standardized, so all Japanese publishers use the same notations. And any weird stuff is explained in the back with many, many pictures. It seems the Japanese are very visual learners and thinkers.

The book consists of 25 scarves in a wide variety of techniques. The first five patterns (A-E) appear to all be ribbles or other variations of the techniques Lily Chin covers in Power Cables. (And if you don't already own a copy, why aren't you treating yourself well?) Scarf E is a particularly dynamic example. Several scarves are familiar techniques -- double-knitting (F & G), Fair Isle (O & P), and even a Gansey-style (V). But there are also some true surprises.  Scarves I & J appear to be garter stitch with different beaded patterns worked on both sides! Scarves K & L are both entrelac, but the shaping of K is truly imaginative.  I must admit, I don't know if I'd consider the entrelac to be reversible, nor the colorful Kaffe Fassett-like intarsia on scarf Q. The nubby textures in scarves M & N are both produced with unusual techniques.  The latter part of the book is mostly interesting pattern stitches that happen to be double-sided, such as a thick and bold rib for scarf R, a lace for S, and two other inventive stitch patterns for U and X. Scarf W is a basic ripple pattern, but it is started at the center of the scarf with diamond-shaped motifs and worked outwards in both directions. If you like ruching, scarf T consists of plain areas of stockinette gathered by simple lace bands. And at the end, scarf Y is a two-color brioche.

If you were having a scarf club, this would be a great book to give you ideas for learning a new technique every few months.

The one scarf which may, in fact, be double-knit cables is scarf H. When I look at the technique tutorials, I see reference to stitches a and a', b and b'.  And the pictures look like pairs of light and dark stitches on the needles, as in double knitting. The braided edge, by the way, is two separate i-cords attached afterwards and twisted as you work. I must admit to being tempted to try this one, as it is so clearly a show off tour de force. It is encouraging to see that there is another equally crazy knitter on the other side of the world -- and she has found a publisher willing to print her patterns.
Posted by Jolie No comments:

In the past I've blogged STITCHES South as individual posts for each day. But this year, I'm going to do it a little differently. I know a lot of people go for the market. Mostly, I go to STITCHES for the classes and the networking. The convention attracts truly talented knitters -- both teachers and students. It is so much fun just to watch what people are wearing.

This year I took four classes. On Thursday I took "Embed and Embellish: Felt, Stone, and Bead Jewelry" with Sharon Costello. I must admit that by the time the convention came around, I could not recall why I signed up for the class! It must have been the beautiful pictures in the brochure. I had not done wet felting before, so this was new to me. My friends Debra and Linda were also in the class. Most of the students were very familiar with wet felting, and they were eager to move along. We learned how to layer the fibers and how to encase rocks or pieces of smooth glass inside the felt. Most of the other participants made cuff bracelets with three stones. Because I was new at this technique, I made a pendant with just one stone. The white strands meandering across the surface of the felt are flax. Some students used strands of silk to produce that marbled effect. During class we completed the felting; I sewed on the small beads later at home. Sharon teaches a couple other classes including Go Felt a Fish and Farmyard Friends. Later in the weekend, Debra made a cute sheep and Linda made a colorful fish. Unlike knitting, felting has the advantage of being fairly immediate. And I have to admit, when I left class, I was almost tempted to go see if there were still open spaces in the Farmyard Friends class. I just don't know what I'd do with a bunch of felted animals. (Maybe I could learn to make felted monsters for Dungeons and Dragons games?) 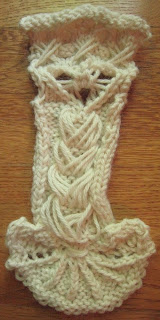 Friday morning I took "Fiendishly Difficult Stitches" with Merike Saarniit. Scenter took the class two years ago, and I have to admit I don't know why it took me until the third STITCHES South to take it! It must have conflicted with something else. From the bottom up the patterns are Alsacian Scallop border, Estonian Embrace Cable, Estonian Butterfly on Open Ground, and Berry Kisses. The border is lovely, and it has an interesting Estonian wrapped nupp maneuver. The Embrace Cable involves letting loops hang loose, then manipulating them in a very interesting way many rows later. Similarly, the Butterfly and the Berries also use unusual maneuvers. These are stitches that are definitely easier to learn with someone to explain and demonstrate than to try to decipher from a book.

On Saturday morning I took yet another class with Merike Saarniit, "Spinning for Knitting." Judging by the feedback on Ravelry, there seems to be a lot of interest in this topic! If you are a new or inexperienced spinner, this class is definitely worth considering. Merike showed us how to spin using high-whorl spindles, and she brought spindles we could borrow during class. For the small materials fee, we also received a very wide range of sample fibers to try. For me, the best part was the instruction and practice of how to ply a perfectly balanced yarn. I believe a lot of us left wanting a second class as we continue to develop our spinning skills. 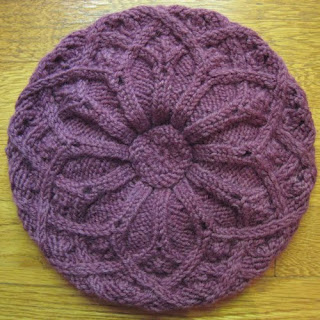 I finished out the weekend all-day Sunday with "Even More Challenging Stitches from Japanese Designs." Gayle Roehm had been here two years ago, so this was a chance to follow up on what I learned then. Of all the classes I took during the weekend, this is the only one that wasn't packed full. I was glad to have friends Pam and Debra in the class. I also met Becky earlier in the weekend in Fiendishly Difficult Stitches, and she was here, too. So it was a nice intimate group of confident, skilled knitters. Gayle walked us through eight different stitch patterns. The Japanese use a standardized charting system. Some of the class covered reading the charts, but some of it involved very unusual elements in the charts -- loops pulled up from strange directions, wrapped stitches, patterns with different numbers of stitches on each row, patterning on both right and wrong-side rows, and the like. The beret is a circular motif which is, believe it or not, from a sweater pattern. I can't say a target is a flattering motif, even on a tiny Japanese lady, but I think it is fabulous on a hat. (By the way, this is the French market yarn from Uzes, France, courtesy of the Bard. Thank you, Ephram!) The complexity of Japanese stitch patterns is an indication of the high level of skill of Japanese knitters.

As always, an excellent weekend of expanding my personal knitting universe.
Posted by Jolie 1 comment: