So, what else did I do at the show? 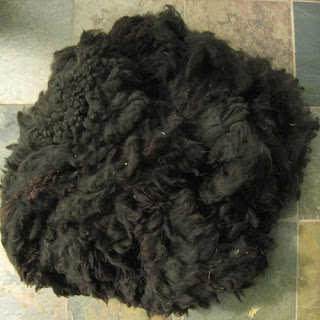 I did do some shopping. I seem to be moving into an alpaca phase. The Carolina Alpaca Breeders and Owners had a booth at the show. They had some yarn, but they were also one of the few booths that had fiber for spinners. Specifically, they had whole alpaca fleeces. I took the intemperate action of touching the fleeces. Soft, very nice . . .  soft, also nice . . . OH MY GOSH! There was a black fleece that was warm and buttery-soft. Gorgeous. LUST!!!! So I ended up purchasing the fleece of Black Diamond, who comes from 3 Hawks Alpacas in Murfreesboro, NC. Her sire is Ghost Dancer. I met Anita from 3 Hawks Alpacas, and she said she is breeding her alpaca for good hand-spinning fiber. I believe her. I've combed just a little of the fleece, and I can see already it has a lovely, fine crimp and a thin, soft fiber. I wish I could show you in a photograph just how awesomely soft and wonderful this fleece is. And it is environmentally-friendly, regionally-sourced.

I also purchased Surino yarn from Flaggy Meadow Fiber Works. Shawn and Jeff are doing a bang-up job creating and promoting alpaca products. Their mill produces yarn and roving. And they also make some finished objects, such as socks or hats. To continue their mission of promoting domestically-produced alpaca products, Flaggy Meadow will be hosting the Fiber Frenzy Retreat in Park City, KY on 17-19 February 2012. I will probably be using my two skeins of Surino to make a variant of the Convolute pattern that started my 2011 reject pile.

One of the nice things about the reject pile is that you never know when a pattern will get a second life. Dahlia, the shawl I sent to the Claudia Shawl the Love Contest, may also be getting another chance in a better, reanimated "zombie" form. I wore it around on Saturday and received many complements and questions about which pattern that might be. Dahlia may get a second rich fantasy life with yarn from Laura and Kelly at The Unique Sheep. Their Gradiance Collection may be an excellent fit of yarn and pattern design.

I should add that I also got some more leads on shows and festivals. Friends & Fiberworks will be hosting a Winter Retreat on 13-15 January in Asheville, NC. And Knitters Mercantile will host Knitters Connection on 15-17 June in Columbus, OH.

Although there weren't many Atlanta people at the show, I did get to spend some time with people I've previously met. I got to spend an evening with Charles D. Gandy, the wonderful designer of the Pedicure Polka and the Snake in the Grass socks from the Think Outside the Sox contest and book. Charles is teaching and writing, and I am excited that I should soon be able to take his classes and learn more about the embellished knitting techniques he uses. His work is dynamic and inventive. And I have no doubt that his book will need to be in my library. Charles has also completed Level 2 of Master Knitter and is closing in on Level 3. He very kindly shared some advice with me. After the weekend, I am feeling more motivated to get moving on Level 2 for myself.

I addition to Charles, I also spent some time with Marilyn Hastings. Marilyn is teaching 13-18 November at John C. Campbell Folk School on the topic of "Recovering Worldly Wool from Sweaters" during the school's Recycle It Week. Marilyn is also working on a book -- and I can't say more than that, other than I've seen her many samples and I think it will be an interesting topic for a broad range of knitters. 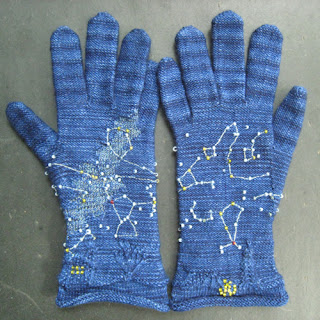 Finally, I rounded out the weekend by bidding in the silent auction. There were several items from previous issues of Cast On magazine. This pair of gloves appeared in the November 2010 - January 2011 issue, which has lots of great information about how to knit gloves. These are the Starry Night Gloves by Meredith Wills, and they appear on pages 17-22. They are a very advanced knit involving stringing several colors of beads in order, a lot of duplicate stitch, and embroidery stitches at the end. I am fortunate that I have skinny hands, as these gloves depicting the summer and winter sky do fit. I will have to wear them next year at Dragon*Con, especially when I am asking questions on the Space Track.
Posted by Jolie 1 comment:

I spent the weekend at the Knit and Crochet Show in Greensboro, NC. This is the show in which both The Knitting Guild Association and the Crochet Guild of America come together. Much like STITCHES, there are classes, a market, banquets, fashion shows, and lots of hanging out with other fiber-crafting enthusiasts!

First off, I must thank Jan Stephens for giving me a shove. I had put in a proposal to teach at this show, and hadn't gotten anything on the schedule. I didn't make the cut for STITCHES East either, so I was feeling discouraged. Jan told me to go anyway. Somehow Gro matched me up with Dana, who was going and needed a roommate. So it all worked out well. Thank you ladies!

I decided not to overload my schedule. I only took three classes. On Friday, I took "Tapas" with Candace Eisner-Strick. I've taken classes with Candace before, specifically “Strickmuster, The Beautiful Twisted Stitch Patterns of Austria” in October 2009 when she taught for AKG. "Tapas" was a fun technique class that was just a little of this and a little of that. I had already been introduced to many of these techniques, but it was nice to be reacquainted with them and to see someone else's viewpoint on when and how to use them. I particularly liked the Channel Island cast-on for 1x1 ribbing. And I had completely forgotten how entertaining Candace is. If you ever see her scheduled to teach something that interests you, please indulge yourself in the class. You won't be disappointed.

My other two classes were crochet. I thoroughly enjoyed the crochet at the show. In the market there was a wall of competition pieces. Some were well-done but familiar, others were well-done and quite inventive. Crochet has advantages including speed and sturdiness. And there really are some very lovely laces worked in crochet.

The first crochet class I took was "Foundation Stitches 101: The Basics" with Marty Miller. Not only is Marty a delightful teacher, but she even got us free cotton yarn, so we didn't have to use stash yarn for her class! One of the downsides of crochet is that it usually begins with a long chain, and then the first row of stitches is worked into the chain. This is a little tricky -- so tricky that when I was a child, my grandmother would work the foundation chain and the first row or two for me on my crochet projects. Marty showed us how to work the chain and the first stitches as you go. Genius! And once you get the hang of it, you can do this even with the fluffy novelty yarns that obscure your stitches. If I did more crochet, I would have taken the second class from Marty where she discusses more advanced foundation stitches. I doubt I'll ever start a crochet project the same way.

The other crochet class I took was "No Stress Motif Joining" with Mary Beth Temple. I was happily anticipating this one, as there are often knitting charity projects that involve many people knitting squares and few people assembling the blanket. Mary Beth was quite ill -- she had had an upper respiratory infection and the antibiotic to combat it had not sat well in her system. So it was admirable that she bravely soldiered onwards to teach us six ways to join motifs, as advertised. I have to admit, I was hoping for something totally brilliant and painless when it came to joining motifs. I did leave with a nice sampler of different methods, so I do have something I can use for comparison.
The thing is, now that I'm sitting here at home looking at my great-grandmother's last afghan (detail at right) -- which is a bunch of granny squares I assembled without knowing what I was doing -- I like what I did on it better than any of the methods Mary Beth taught me. Because she was so ill, she had forgotten the handouts for the class. So, I am hoping that the handout will maybe give me some more insight. I wouldn't shy away from taking another class with her, as I don't think it's her fault I didn't experience the "Wow, this is awesome!" moment in her class. I suspect the brilliant, painless method for joining motifs just doesn't yet exist.