This first swatch is a "basic" Japanese lace pattern -- that is, it has action on both right and wrong sides. Although it is a stockinette-based lace, the increases and decreases push the wales in different directions to create a surprising amount of movement and texture.
Gayle called swatch 2 a faux paisley. Like the dogwood lace swatch B in yesterday's post, the chart has large open area of white space that are disconcerting to the uninitiated. The top of each paisley also has a strange maneuver that is sort of a cross between a cable and a decrease. Once again, something you want demonstrated to you in person.
Like yesterday's swatch F, swatch 3 uses multiple wraps to create texture. It is hard to see with the black yarn, but there are over-sized stitches that create texture. This bears some similarities to a stitch from Merike Saarniit's "Fiendishly Difficult Stitches" class.
Swatch 4 shares some commonalities with yesterday's swatch C. Once again, there are lots of short rows in the middle of the fabric. This time, the short rows are combined with cabling on the wrong-side return row. The long strand is an unavoidable element of the design. Of course, if you threaded some long bugle beads, the effect might be flashes of light playing off the high texture. Who thinks up this stuff?

Again, I've worked this in a dark yarn so it is somewhat difficult to see. The right portion is a lace motif common in Japanese patterns. The left part of the pattern contains a section of wrapped or bundled stitches. It is this left section that contains several strange maneuvers -- multiple wraps, slipping or parking stitches that are reincorporated on later rows, and bundling several stitches together.
What can I say about this one? Two colors, multiple wraps, passing stitches over and through, knitting through the back of the loop -- might as well put up a sign saying, "Do not attempt without a sherpa" or "Why merely knit or purl the next stitch, when there is so much else you could do?"
Japanese knitters do not distinguish between knit and crochet the way we in the West do. Swatch 7 reminds me of the Solomon's Knot pattern from crochet. This knitted version involves knitting up a stitch from a strange location and then immediately making a decrease. There is also yarn over patterning on the wrong side return rows.
This circular pattern reminds me of a Gothic rose window. The chart was written out flat, with lots of big gaps in the columns. In typical Japanese fashion, the details are well-considered. The wales of knits are twisted stitches, making them pop off the reverse stockinette background. Twisted purls are used to close yarn over increases.
Because the class did not fill completely, Gayle had some extra bonus handouts. This last swatch I've had to photograph rather than set on my scanner, as it is too big. I think it was a bonus swatch from this class rather than the other, but I'm not quite sure. I've worked it in a long-print yarn to show off that the motif is not worked from the center out. Rather, it is cast-on at the diagonal and worked as a decreasing triangle with a cabled border on both the left and right selvedges. The next quadrant is picked up along one of the cabled sides from the previous quadrant. In the end, the first and fourth triangles are sewn or grafted together along the miter. Between the twist and the diagonal lines, the square has a strong feeling of motion. And once again, how many people would think of knitting a square as four triangles picked up on the bias?
Posted by Jolie No comments:

This led me to pull out my notebook of class handouts. When I took that first class at STITCHES 2009, I was not in the habit of keeping my swatches. Rather, I learned in class, ripped back, and reused the yarn. I also put all the handout pages in one page protector. Now I know better. Now I put each page in a separate protector and I put the swatch in with the page, so I can see what it was I did. After giving my presentation for AKG, I decided to knit the missing swatches and revisit what I had learned.

If you have a chance to take a class with Gayle, I recommend it. Over the past five years I have gathered about half a dozen Japanese stitch dictionaries. They are often innovative and inspiring. Gayle will teach you what you need to know to read the charts. And she shows you how to do the strange maneuvers. In today's and tomorrow's posts, I'll show my swatches so you can understand why these patterns are so intriguing and why you would want to take a class or two on how to make them.

This first set of swatches labeled A through G were from "Challenging Stitches from Japanese Designs."
I recall referring to this chart as the "shock and awe." The chart looks fairly plain, but there is a little box on the side with very strange marks in it -- circles of varying sizes along with vertical lines and some crossed lines, too. That box explains how to make this rather crochet-like pattern that involves extreme increases and decreases. Truth is, since I didn't keep the original swatch from 2009, I'm not 100% sure I've worked this correctly. Maybe it is just because I knit it in fuchsia, but the motifs remind me of small roses.
Swatch B looks to me like a dogwood blossom on a lace background. The chart again looks very strange due to the extreme increases and decreases. Columns of the chart are split into strips. This pattern also has action on every row -- definitely not for the beginning knitter!
Swatch C bears a similarity to chart A in that the chart does not look scary until you look at what the little box on the side means. This highly-textured pattern looks a little funny when flattened on my scanner. The maneuver here involves working short row tabs and then turning them before continuing across the row. Who thought of that?
Then there are the Japanese patterns that are just plain show-off acrobatics. Bobbles, cables, twisted stitches, and some sort of dipping down across several rows maneuver that Gayle called a "blackberry" stitch -- the bud-like texture inside the cabled ovals on the right edge. The blackberry stitch is something you want someone to show you in person. Why knit the next stitch when you could just knit up a new stitch anywhere?
I've purposely blocked swatch E quite flat. This is a short-row pattern similar to the famous Lizard Ridge blanket. The chart is a bunch of triangular grids separated by open spaces. The pattern is a wonderful scallop shell well-suited to long-print yarn. If you don't stretch it flat when you block it, the shells even bow outward a little like real seashells. Wouldn't this make a fabulous blanket?
The purpose of swatch F was to explain how to handle a non-standard symbol in the chart. In this case, the pattern is produced by purposely messing with the gauge via double-wrapped stitches. I've seen condo knitting -- using two radically different-sized needles on different rows to create patterns -- but I don't think I had previously encountered varying stitch sizes on the same row to create texture.
I think this last swatch was a bonus swatch. The chart wasn't all that difficult to follow, although it did contain a twisted purl that helps make the stockinette motif pop off the reverse stockinette background. It is the sort of subtle refinement typical of Japanese crafting culture.

Tomorrow: swatches from "Even More Challenging Stitches from Japanese Designs."
Posted by Jolie No comments:

A Little Too Much Perspective?

Most weeks I follow the nightly news fairly closely. The last few weeks have been an exception, since I was traveling over the holiday. And this week I haven't followed too closely, as I've been catching up from being away for nineteen days as well making preparations for the upcoming end-of-year holidays. Like most Americans, I heard about the horrible mass shooting in San Bernardino on Wednesday. On Thursday, I skipped watching the evening news since it appeared the entire broadcast was still covering that story. And then this morning, my dear friend Andy sent me an e-mail.

One of the people killed in Wednesday's massacre was someone I knew. 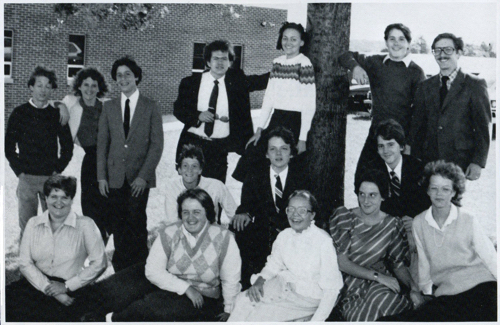 In this picture of the speech team (scanned from my yearbook), my dear friend Andy (left), myself (center), and Hal (right) are leaning against the tree. Coach Phillips is on the far right, next to Hal. (If anyone knows whatever happened to Jim Phillips, Andy and I would both love to know. It may be a cliché that coaches make a positive difference in young people's lives, but it is true nonetheless.)

I guess I didn't recognize the name because he was reported as "Harry Bowman," whereas I knew him as "Hal." If I recall correctly, Hal was my prom date in 1984. I don't remember now how many people I asked before I got a "yes." Five? Seven? Hal was a freshman and I was a senior way outside most of the social circles. Since prom is a milestone, I thought it important to attend, even though I had never attended a school dance. Andy's original date was also from the speech and debate team, I think, but she broke a bone and had to cancel. Andy did find a back-up date on short notice, but our original plan -- a double date amongst friends -- collapsed. I remember the night being short; and I remember Hal's sister liking my dress choice. And I think I remember his mom being nice and taking pictures.

There are people we don't think about much. They were part of a chapter in our lives that was so far back, it is in a different volume. They may be ancillary characters to our own narratives, but we like to think that their lives went on, and good things happened, and life was happy. It is so very sad and shocking when it does not. My deepest condolences to Hal's family, and especially to his two daughters. I grew up missing a parent. I know that through the remaining milestones of their lives -- graduations, weddings, births -- there will always be a hole where that missing man should be; there will always be a touch of bitter when the occasion should be sweet.
Posted by Jolie No comments: