A Double Increase and Another Knitting Heresy

I made another reversible lace video. This time, I'm demonstrating the knit, yarn over, knit into the same stitch double increase.


In reversible lace, you'll substitute knit-purl, double yarn over, then knit and purl again in the same stitch pair. The maneuver is a little fiddly, but it does get easier with practice.

Working out how to do this maneuver made me realize it may indeed be possible to knit into the same stitch twice! Heresy!

In normal knitting, you can't work the same stitch twice. In the video, I show you how this doesn't work. Specialty stitches such as bobbles, nupps, and star stitches use knit, yarn over, knit — or even longer strings of alternating knits and yarn overs — to generate multiple stitches from one stitch. But in reversible lace, each stitch is a knit-purl pair. You can knit, purl, then back up and knit again without creating the intervening yarn over, and purl. It does not violate the laws of three-dimensional reality to do this multiple times.

I have hardly begun to explore the possibilities! In addition to having a new way of creating specialty stitches, it might be possible to mimic some crochet stitches. In crochet, you can work into the same stitch multiple times. There are some maneuvers crocheters do that knitters do not do. But, those might be possible in reversible lace.
Posted by Jolie 1 comment:

This year, I was able to attend the 44th annual Maryland Sheep and Wool Festival. As many of you know, I have a very lovable cat with health issues that curtailed my travel in 2016. While Vincent is not fabulous this year, he appears to be more or less stable. It was with some trepidation that I penciled a couple weeks at the Maryland man cave into my schedule.

Time with the Cuddly Hubby was well-spent. He has made geek friends that he sees usually two or three nights a week. Star Wars Day (May the Fourth) fell on the group's usual Thursday game night. It was an all-out Star Wars party with decorations (including a Princess Leia cardboard standee) and appropriate games including Trivial Pursuit DVD: Star Wars Saga Edition. The competition between both teams was tight. I think next year we want a rematch using Trivial Pursuit: Star Wars Classic Trilogy Collector's Edition instead. I brought Star Wars chocolates. Michelle brought Wookiee cookies — gingerbread cookies decorated with bandoliers and fork impressions to imitate fur. There were other nights of team trivia at the local pub, more games, and about a dozen people attending the opening night of Guardians of the Galaxy, Volume 2.

I was delighted to be able to attend Maryland Sheep and Wool with my dear friend from Center for Knit and Crochet, Jennifer Lindsay. I must admit we did not provide much adult supervision for each other. In addition to being president of CKC, Jennifer curated the Twist: The Art of Spinning by Hand exhibition I participated in last autumn. This meant that walking through the show with Jennifer was great fun, as she was able to introduce me to many people from the spinning world. Together we did a lot of shopping and admiring. And we bought some fleeces (more about mine in another post later).

The highlight for me was that I decided to participate in the Skein and Garment show. In order to get the submissions into the show, I sent them through the mail. It is anxiety-inducing to put carefully-crafted items into the mail and send them 700 miles away, trusting they will arrive okay. They did. And the exercise was worth the anxiety: 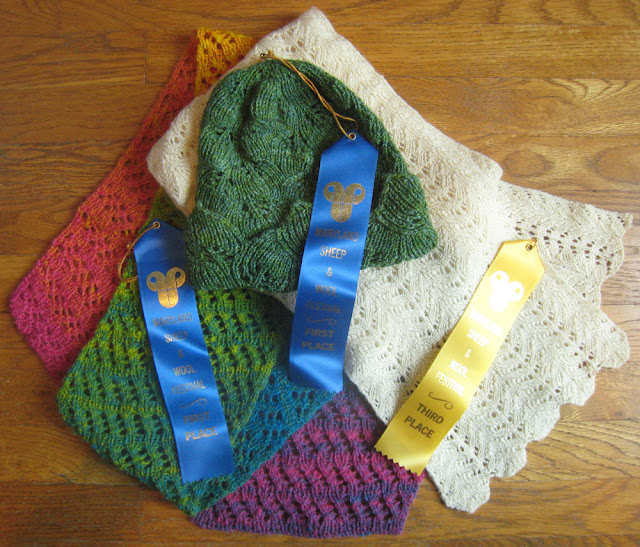 The knitting part of the competition has 16 categories, about half of which require handspun yarn. Items also must have been completed since last year's show. The Rainbow Zing scarf received a blue ribbon (1st place) in category K04 — Scarves knit from handspun yarn. The Kennesaw Kudzu hat was in category K14 — Miscellaneous knit from commercial yarn. And the Assiduous scarf was in category K10 — Scarves knit from commercial yarn. And somehow I haven't blogged about any of these projects!

The rainbow scarf is made from the optically-blended yarn I made last summer. An article about that yarn will be in the summer issue of Spin-Off magazine. The pattern is a simplified version of Za-Zing, which was last year's Georgia FiberFest knit-along. Assiduous is a hat and scarf set worked in lace weight yarn. The hat is Kennesaw Kudzu, a sock pattern with a bonus hat pattern that I haven't even published yet.

The irony here is both of the blue ribbon winners took me less than a week to make. I knocked out the hat in five days back in January. And the rainbow scarf was my Dragon*Con project last year. The white scarf took about 6 weeks and around 75,000 stitches on a size US 2/ 2.75mm needle.

I truly did not expect to win any ribbons. The Skein and Garment show at Maryland Sheep and Wool has lots of very good entries. There is always someone who submits an incredible beaded lace shawl. And I really did not expect to win ribbons for smaller projects. The hat didn't even use a full skein of yarn, for crying out loud! I just wanted to get the reversible lace technique in front of more eyes.

As with so many things in life, just showing up and making an attempt is the first step.
Posted by Jolie 1 comment: