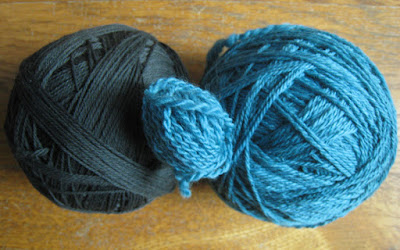 Last week was Spinzilla 2015. Spinzilla is the week-long spinning competition/excuse to ignore housework. Last year I spun lots of little sample bits from my stash. I still have quite a few sample bits in the stash, but most of those I didn't want to spin during Spinzilla. I didn't want to spin the cotton, because that isn't fast. I have quite a few undyed exotic fibers, but I'm thinking about dyeing them and making mad batts, so those weren't ready for spinning. And I have several fibers I hope to corespin, so those weren't ready, either. This year I chose much less interesting spinning than last year. 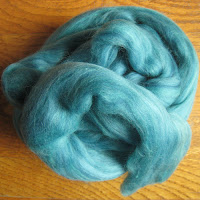 I started with some Ashland Bay color fusion top. Last year I spun the same top in the mixed berry colorway. This year I spun the cyan colorway. This was commercial top with some color variation but not too much -- mostly tints and shades of the same hue or closely-related hues, rather than a mix of many disparate colors. I purposely spun a fine three-ply. I ended up with a little bit leftover, which I turned into a 2-ply. The final yarn looks like a solid color, but has just a little variegation. (I am thinking the photo of the finished yarn better represents the color than the photo at left.) 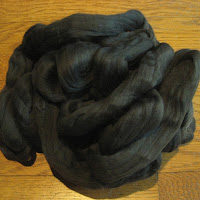 The other fiber I chose to spin was carbonized bamboo I purchased in the 2013 STITCHES South market. This is one of the those fibers I purchased just because it looked interesting. The fiber is a mat dark gray almost black. How much more black could it be? The lack of shine makes it look like it was extruded from a black hole. Darth Vader or ninjas would wear this! I also spun this up as three separate fine plies and then plied them together. I got over 500 yards out of 4 ounces/116 grams. This single skein incorporates more than a mile of spinning.

To accomplish this much spinning in a week, I ended up tethered to the spinning wheel for most of the weekend. I watched all my backlogged television recordings, including the second half of Once Upon a Time, season 3, (the story arc with the Wicked Witch of the West) and all of Once Upon a Time in Wonderland. Has anybody else noticed that when Rumplestiltskin is at a spinning wheel, the position of his body and hands in relationship to the wheel rarely makes sense? If Robert Carlyle ever comes to Dragon*Con, I must ask him if he knows how to spin.

Monday night the spinners from The Whole Nine Yarns Spinzilla team gathered at the shop to show off their accomplishments and measure their yarns. As you can see from the photograph, most of them used much more colorful fiber than I did. According to our team leader, Chris, we accomplished 24,687 yards of spinning, or about 14 miles! 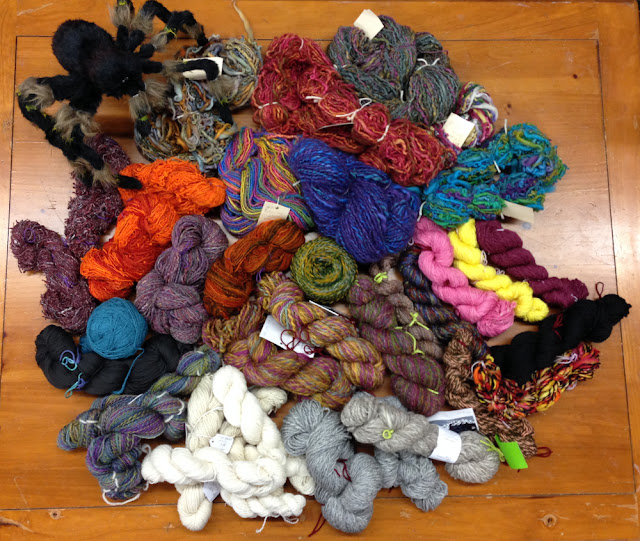