Last weekend North Georgia Knitting Guild was delighted to bring podcaster extraordinaire and practical knitter Brenda Dayne to the Atlanta area for two days of workshops. I gleefully signed up for the works -- “Creative Glove Design,” “Beginning Bead Knitting with Mrs. Beeton,” and “No Math Sherman Toes and Heels.”

For the glove class, Brenda had a thorough and informative slide presentation and a handout with places to record our own hand measurements. I knit one pair of gloves many years ago -- and keep wondering every winter why those two skeins of plum-colored qiviut in my stash haven't knit themselves up into gloves yet. I also have a skein of pimento-colored cashmere that might make for nice gloves. Brenda is clearly someone who has knit gloves more than once, and she was able to provide several bits of information I had not yet encountered on the topic. Very helpful!

The sock class was an all-day affair in which we knit baby socks to learn the technique. I had encountered the Sherman toe before in Wendy Knits but didn't realize that's what it was. This is the technique where you cast on your full sock number over two needles using Judy's Magic Cast-on, then work back and forth on one needle to work an hourglass toe, then finally start working in the round. The advantage is that once you know and understand the technique, you can pretty much just grab yarn, cast on, and go. The hourglass heel is worked in a manner akin to the toe. Good as it is, I'm not a convert and think I will stick with Cat Bordhi's foxglove sockitecture. But I'm glad I took the class and was exposed to the technique in depth.
The class that turned out to be the little gem of the weekend for me was Mrs. Beeton. I've heard Brenda talk about this pattern in her podcast. I had paid it little mind. It turns out to be a delightful little pattern. I especially recommend downloading version 2.0 of the pattern. Because this project is designed to use little leftover bits of yarn, Brenda gives you the yard-by-yard requirements for each bit of the project. This is a great stash-buster.


The trickiest part of the pattern is the beaded cast-on. By the way, don't let the stringing beads put you off. I used a dental threader and strung all the beads for one gauntlet in under 15 minutes. Brenda has you use long-tail cast-on with the beads on the skein side. I used long-tail but with the beads on the tail side, which is why the beads on mine are way out on the tippy-tip edge of the ruffle. I was also pleased that when I dug around in my bead stash, I could find small beads and large beads that coordinated with my yarn and that matched each other. Sometimes, it truly is better to be lucky than good.

I also got lucky with the yarn. I used one of my one-ounce skeins from Merike Saarniit's "Rainbow Microwave Dyeing" class. I believe I had dyed the skein "across" rather than "around" according to Laura Bryant's terminology. I worked the ruffles of the first gauntlet down past the join. I did not break the yarn. Then I worked the ruffles of the matching gauntlet also down past the join using yarn from the other end of the skeins. At that point I could work both gauntlets simultaneously for the ribbing until I was nearly out of yarn. For the bind-off, I used Lucy Neatby’s version of picot bind off from Knitting Gems 1 DVD, and TECHknitter’s excellent version of circular bind-off. I did go down one needle size on bind-off so as to have enough yarn and to keep the bind-off from splaying out. And I did have to knit fewer rounds of ribbing than the pattern recommended. But the luck was that the ribbing section just happens to be the correct magic number for my little mini-skein. I the yarn flashed, but it flashed the same way on both gauntlets, even though they were worked from opposite ends of the skein! 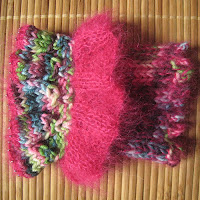 To give you an idea of how quickly these can be made: I cast mine on Thursday night during a power outage (thank goodness for my rechargeable LED lantern), worked on them in class on Friday, and finished them on Saturday night. If you have scraps, you could make up a few sets of these and put them aside for last-minute holiday giving.
Posted by Jolie No comments: