The Thing in question is not a Wookiee. In this case, the Thing is a mahogany African bar. The Cuddly Hubby's family lived in Ghana for two years in the mid-1970s. They brought back a lot of indigenous household goods. A few years ago, the Cuddly Hubby's dad and step mom were redecorating and some items just didn't fit in their home anymore. One of these was the bar. As you can see from the photo, it is not a small object. Furthermore, the bar had been in the basement family room and used as a plant stand for quite some time. It had not been oiled every year. And there were water stains in the top where the plants had been set. The Cuddly Hubby's sister didn't want it, and the Cuddly Hubby didn't want it to fall out of the family, so he agreed that it could be sent out here. Marriage involves compromise, and this was one of those moments for me.

The bar then spent several months wrapped up on a trailer waiting to be towed from Washington state to Georgia. Finally, the Very Talented Aunt and Uncle were making a trek out this way to bring items to their newly-wed and expectant daughter, and they were able to bring the trailer. So the Thing came to take up too much space on the back porch.

And it stayed on the back porch for a couple years. Not oiled. Not entirely protected from the elements. Finally, I got out there and took a look at it. One of the carved panels had come off. The other was loose. The plain panel in the center was loose. Both of the carved side panels had gouges in them where ropes had rubbed against them in transit. The top had big ugly dark rings from the plants. The large center shelf was warped. Ugh!

And then, I got an idea. What if I took all the panels off? What if I turned the drawers around, so they slide out on the front side instead of the back? What if I pushed the whole thing up against a wall, as if it were a sideboard? What if the carved panels were hinged like a cabinet? 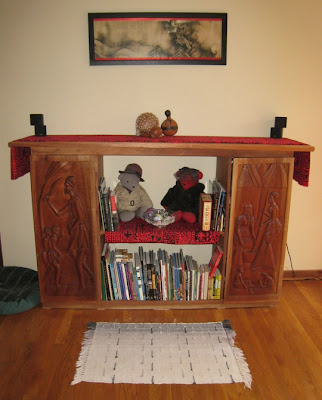 Sometime in 2007 I began sanding the thing using a finishing sander borrowed from the Bard, who uses it for his model airplanes. I got a little done. Then in the spring of 2008, I made a real concerted effort to get at it. I still have some work to do on the two small drawers. (They are hidden inside the left panel.) And the center shelf still needs to be straightened and sanded (hence the cloth covering it), but at least the bulk of it is done. Early in 2009, I was able to hire the husband of one of the ladies in the guild to come over and hang the carved side panels. They are slightly warped, so it was really good to have a professional who has a lot of experience do this. There are moments where expertise is worth every penny, and this was certainly one of those.

This has been a tough year economically for so many people. In light of this, Brenda Dayne of Cast-On podcast did a series with the theme "Make Do and Mend." The Thing has turned out to be a great example of that. It took a lot of work. And a whole lot of sandpaper. Thank goodness sandpaper is relatively inexpensive. But the Thing has become an opportunity. It is now storing media -- some of our favorite videos and books. (Harry Potter, Star Wars, and Lord of the Rings are all hidden behind the carvings.) And it has becoming an opportunity to display some African items. The red and black cloths are from Ghana as are the musical instruments. I sanded the top so smoothly you could do physics experiments on it. And some of the mahogany dust generated from all the sanding was put to good use by both Scenter, who wanted it as a reference scent, and the Bard, who can use the dust to patch model airplanes.

A couple other items to mention in the picture. I believe the little throw rug is also from Ghana. At minimum, it was amongst some items that came from the Cuddly Hubby's family. The dragon scroll picture also has a "Make Do and Mend" story. It was a poster given to me by a colleague the year I taught at Bauder College. She was de-cluttering, had a stack of good-quality art posters, and asked if I (the art history teacher) would like this detail from a Chinese scroll. I cropped off the section that advertised "Boston Museum of Fine Arts" and went to the big box store to find a plain black frame of the proper proportions. I came home and discovered that the poster was the right width but it was now a little too short. My cropping had been a bit too zealous. So I returned to the big box store and purchased some narrow red ribbon. I affixed the ribbon at top and bottom to add just a little more height. It wasn't until I had the whole thing framed and on the wall and was admiring it that I realized a real scroll painting would be likely to have a narrow fabric border. Furthermore, since this is only part of the complete scroll, there is no border to the left or right, thus implying the existence of more image in both directions. In solving the cropping problem, I had inadvertently given the image exactly what it needed!

Sometimes what we need is not only closer than we think, it isn't even all that expensive.
Posted by Jolie No comments:

A Class with Joan Shrouder 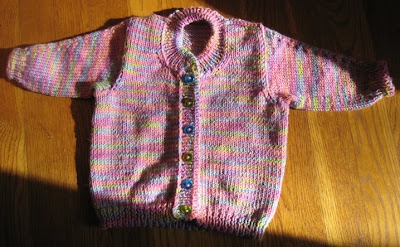 This autumn has turned out to be a rather busy season, mostly full of cleaning and organizing and not nearly enough raw knitting. Part of the cleaning and organizing involved looking around at what was on the needles. There were definitely projects that were only a few hours shy of completion. One of them was this little sweater. This was the project for Joan Shrouder's "Set-in Sleeves Simplified" class, which I took at STITCHES South back in April. Happily, Joan will be at STITCHES South 2010 and will be teaching this class all day Sunday. 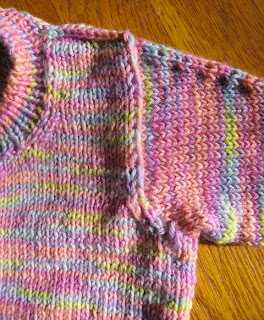 The homework for class involved knitting the bottom rectangle of the cardigan. Because I've become enamoured of it, I used Elizabeth Zimmermann and Meg Swansen's method for a tubular cast-on. I arrived in class with an inch of 1x1 ribbing and several inches of plain stockinette. Over the course of the 6-hour class, Joan shows you how to shape the armhole and neck. Since the sweater is small, there is time to knit it in class. Then she demonstrates how to pick up for the sleeves. Joan uses a rather interesting technique in which she purls up rather than knits up the sleeve stitches. As you can see, the result is a sleeve that truly looks set-in.

Joan is knitting in the Zimmermann tradition, as she works the sleeve decreases on the top rather than the underside of the sleeve. As you can see from the top photo, the outstretched sleeves are longer on top than on bottom. If you hold your arms at your side, you want the longer line to run along the outside/topside. If it runs along the inside/underside, you can end up with a lot of bulk at the underarm. I completed the sleeves with a little 1x1 ribbing and the matching tubular bind-off. (Incidentally, I would be tempted now to use Jeny Staiman's Surprisingly Stretchy Bind-Off.)

To finish it out, I purled up button band and neck stitches, worked a little more 1x1 ribbing with a few yarn-over, k2tog buttonholes, and finished with more tubular bind-off. A little blocking, a little weaving in ends, and a few buttons brought the project to a close. Incidentally, I plied a strand of lavender sewing thread with the yarn before attaching the buttons. My hope is that the thread will add just a little more strength to keep those buttons where they belong.

The whole project took almost exactly 1.5 skeins of Cascade 220 Superwash Paints. This lovely colorway, #9860, is really perfect for springtime or children. And with about 100 yards left, there is probably enough for matching accessories, should the inclination strike me. With everything else I want to knit right now, it probably won't.

As a last tidbit, I'm including here a video of how I worked increases after the purl-up row. Since Joan works the same slipped-stitch edging that I like, if you pick-up in every stitch you'll be a little short in stockinette. Depending on the reference source and the individual knitter, you should pick up something like 3 stitches for every 4 rows, or 4 stitches for every 5 rows in stockinette. A slipped-stitch edging means you have 1 stitch for every 2 rows. This is perfect for garter stitch but too few stitches for stockinette. (Quick math example: if you have 100 stitches along the edge and want to pick up 3 for 4, you'll pick up about 75 stitches. 1 for 2 is only 50 stitches, so you'd be 25 stitches short.) To prevent your new sleeve from binding tightly at the armhole, purl up one stitch for each edge stitch, then increase up to the needed total on the first row. There was considerable discussion in class about which increase to use. I stumbled across a very slick and virtually invisible way to do so in this particular circumstance, and the video will show you how. Enjoy!
Posted by Jolie 3 comments: