Oddly enough in the busy aftermath of STITCHES South, I managed to keep focus on a little project. I started the Blue Shimmer/Blå Skimmer cuffs during Susanna Hansson's "Bohus Stickning" class. Partly because I wanted the picot edging to match on both cuffs, I was motivated to get the second cuff cast on before I misplaced the scrap of paper reminding me of what I had knit. 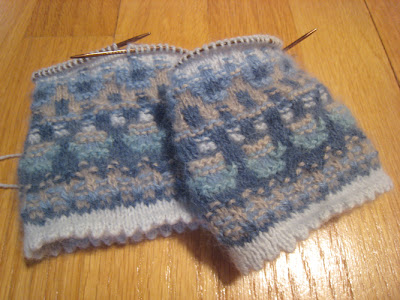 These are still on the needles because I'd like to expand them into gloves. I plan to acquire some nice indigo-dyed cashmere. When I knit the gloves, I'll just knit plain. I don't want to detract from the fabulous Bohus pattern. I did not buy the cashmere when I saw it in the Market at STITCHES South because I felt that buying cashmere would be motivation for finishing the cuffs. It is!

I'm sure not all Bohus patterns are similar to this one, but I do have a few observations. While you do have to strand colors across the back -- and sometimes carry more than two colors in a round -- there are also a fair number of plain rounds in only one color. This is very helpful, as the plain round helps you reset your tension. It is easy to strand too tightly or too loosely, but the plain rounds bring you back to a consist baseline, preventing your tension from drifting too far afield.

The other thing I noticed was that it was fairly easy to prevent a jog in the colorwork by simply shifting the start of the round by a stitch or two. Most of the time I could either back up one stitch or jump forward a stitch or two. And since new colors came in often, those presented lots of convenient opportunities to shift.

I also didn't use any stitch markers, not even an end-of-round marker. Since most of the pattern are small, I was pleasantly delighted to discover I could easily discern the beginning of the round most of the time.

I worked these cuff simultaneously on a pair of micro-circular square Kollage needles. I've expressed my fondness for the square needles before, but I just keep finding more reasons to like them. It wouldn't be perfectly obvious, but they are great in the small sizes because the square cross-section resists bowing and breaking. While I am usually an adherent of magic loop, I ran into a problem with it on this project. This 50% merino, 50% angora yarn is so soft that the stiff cables on my circular needles would push the stitches apart and create ladders. I didn't want to work on double-pointed needles, as I was afraid that would make the problem twice as bad by creating four ladders instead of two. The micro-circulars worked reasonably well. I had one cuff on a stiff-cable and one on a floppy K-cable. In this instance, I liked the K-cable better. I liked it so much better that I've recently ordered a couple more long circulars with the K-cable. There are a few other manufacturers that make micro-circular needles -- i.e. circular needles in the 8-inch or 9-inch length. Hiya Hiya is probably the best known. Addi also makes needles in the micro length, but not in the .25mm increments that they use in the rest of their line. This is a great mystery of German engineering to me that the micro-circulars perfect for knitting socks would not come in the full range of sock-knitting sizes. Bottom line: if you haven't tried a micro-circular for a sock or cuff, buy one and see what you think.

Speaking of Kollage square needles in general, I think it is important to know that Susie and Mark over at Kollage have decided to get out China and bring jobs back to the United States. Hurray! Kollage yarns and needles will be made here in the USA. This is delightful news on several levels. For one thing, the needles will be made just over the border in Alabama, less than a 2-hour drive from my house. I don't know if tours will be available at some point in time, but I think it would make for a very interesting day trip. This whole shift is especially great because later in the year Kollage will be able to produce needles to order. Remember when I couldn't make my knit, Swirl jacket on my Kollage squares because they didn't come in a 60-inch length? Soon those problems will be a thing of the past. Depending on the equipment, it may in the future -- possibly just before the holiday season -- be possible to order needles that are custom engraved. You could put your name and e-mail on your needles! Kollage might even be able to produce needles in more than one color. I think a pair of needles, one in the bronze finish and the other in another finish would be great for working in the round on two circular needles. You'd have matching gauge because both needles would be the same material and size, but the colors would insure you always picked up the correct needle of the pair. If the phrase "Made in America" is important to you, remember Kollage next time you are in your local yarn shop.
Posted by Jolie No comments:

On Saturday I drove up to Thunder River Suri Alpacas to see the alpacas being sheared. Rose has been a wonderful supporter and member of North Georgia Knitting Guild and Atlanta Knitting Guild. Her alpaca farm produces animals for other people who would like to start a farm, as well as a range of alpaca products from raw fleece to yarn to dyed yarn to finished garments. Suri alpaca has a lovely sheen and drape similar to silk. It is soft and warm. For spinners, alpaca doesn't need to be scoured before spinning because it contains very little lanolin. This also means that when you buy raw alpaca fleece, very little weight is lost after washing and spinning.

If I recall correctly, Rose has her herd divided up into several groups and keeps them in separate but adjacent pastures. She has a bachelor group of males, a bachelorette group of females, and a group of mommies with babies. Like other camelids, alpacas will spit to express displeasure. At least they aren't subtle, as you know when you've offended one. On the other hand, they have a lovely happy hum they use for friendly communications. It is pleasant to observe a group of alpacas, all happily humming to each other.
I don't recall the names of the nice men doing the shearing, but I must thank them for being willing to shear "little brown girl," a 6-month-old cria who doesn't yet have a name. From the official color card, she appears to be a color called "bay black," which is a black with a dark brown undertone. Her coat was not only soft but also glossy. I forgot to get a picture of her after shearing, but she looked like a creature made of dark brown-black silky velvet. She's in the middle of the picture at top before shearing.
On the lock, you'll notice that her fiber is frosted at the tip. The bleaching may be due to either the sun or the exposure of this first fleece to placental fluids. You can see that underneath her locks are a color that would make Milton Hershey envious. I'll have to do some thinking about this special fleece. I'm tempted to tail spin at least some of it, which would produce a yarn that shows off the locks. On the other hand, such an art yarn is trickier to incorporate into a project. Some spinners would probably snip the tips, but I may leave them because even their coppery color is lovely. As with so many things, I will need to sample and see.