I've written a little bit about exhibiting knit and crochet.

One of the reasons quilting is taken seriously as an art form is that quilters exhibit their work. They also keep records. If a scholar wants to research the connection between a quilt pattern and a particular group of people in a particular time and place, there is the possibility they can do so. Even if a quilt is in poor condition, non-quilters recognize its value. They appreciate that time and skill were involved in its creation. 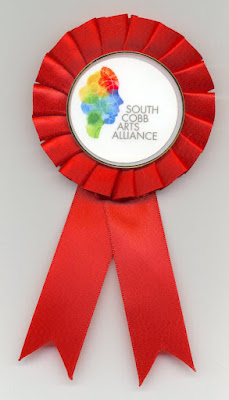 But if you have ever crawled the aisles of a second-hand store such as Goodwill, you will see that non-knitters and non-crocheters do not always recognize the value of the work. It is not uncommon to find a crocheted afghan languishing in a second-hand store. Not all of these are great works of art, but they are the result of time and skill. Very often they are a physical manifestation of love. Keeping records of what we've made and exhibiting those items as works of fiber art are things we can do to help non-crafters recognize the value of our creations.

As part of "walking the walk," I decided to put a couple of my items in the most recent members' show at South Cobb Arts Alliance. This is a members-only exhibit, and not juried. Most of the work was two-dimensional pictures including photography, colored pencil, drawing, or painting. There was also a little bit of sculpture, such as some Raku pottery. I exhibited the blue and green swirl jacket I made entirely from handspun. And I exhibited "Scrawling," the long rectangular scribble-law shawl that uses commercial linen and handspun art yarn. To my delight and surprise, "Scrawling" won the second-place ribbon!

This was the third time I had exhibited "Scrawling," the other two were at Southeast Fiber Arts Allliance and at Arrowmont last year during Fiber Forum.

If you aren't sure how to make a work of knitting "ready to hang," here's what I did for "Scrawling." 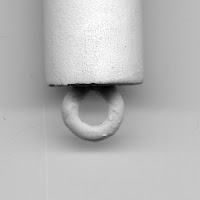 I bought a half-inch diameter wooden dowel and two screw eyes or eye bolts — a screw that has a loop at the end instead of a flat head. The eyes screw in to the ends of the dowel, thus producing a stick that can be nailed to the wall. (If you prefer to use a drill, you could drill a hole near each end of the dowel, but then you have to be sure to line them up. The screw eyes can be turned until they align, thus making them easier to install correctly.) I bought a can of flat white spray paint, and gave the whole apparatus a good coating.

When I want to exhibit the shawl, I can wrap it several times so it drapes around the dowel. Since it is wrapped around the dowel and the dowel is nailed into the wall, this also makes it difficult to remove the shawl. You can't just tug the shawl off the wall and run. This also means that the shawl is supported in multiple locations. Yes, it does stretch a little. I can't turn gravity off, and she can be a harsh mistress. (As the joke goes: Gravity. Not just a good idea; it's the law!) But it works well enough.

I hope my experience will encourage some of you out there to consider exhibiting your work in your local art shows.
Posted by Jolie No comments:

Labels: exhibit, how to, knit 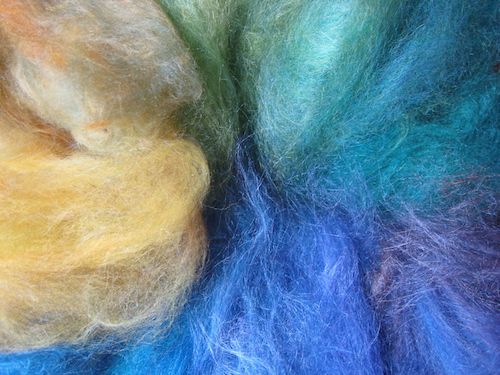 The National Needlearts Association (TNNA) is conducting a survey of fiber artists as part of their 2016 report. TNNA is the trade group for fiber arts retailers and manufacturers. You may have heard the staff of your friendly local yarn shop talk about going to TNNA. They host a twice-yearly trade show that is the major opportunity for retailers to see all the latest developments in our field. They also host direct-to-consumer events, such as Spinzilla. And they were very supportive of Center for Knit and Crochet by contributing funds that made the initial symposium in 2012 possible.

TNNA has asked people to spread the word. The survey is here and will be up until Saturday 13 February. It is an anonymous survey, but there is a chance to win a $100 gift card. If you knit, crochet, spin, weave, embroider, needlepoint, or cross stitch, your input is needed. The data helps people on the business side of our industry make smart decisions. After all, we do not want friendly local yarn shops to become extinct!

The summary will be available later at this link.
Posted by Jolie No comments: