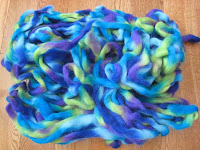 I've been enjoying spinning the Louet Northern Lights roving I bought at The Mannings during Christmas. This is a standard roving, color 28 Violets. It actually has a fair amount of blue and green, including a nice shock of hot kiwi and a little punch of almost plain white or very pale blue. There were two hanks in the shop and I bought both, figuring that eight ounces would give me enough yardage to produce a substantial project. One of the problems for me with spinning is going to be projects. I don't need or wear a lot of hats or gloves. Most of the things I make for myself are shawls or sweaters which require a significant amount of yarn. So my hope for this roving was that I'd have enough yardage at the end to really make something. 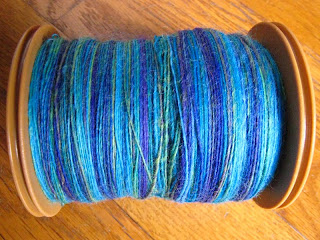 As per my typical practice, I pre-drafted the roving. Because I'm still a novice, I used the second-lowest ratio on my wheel. Sometimes I attend the Monday spin nights at The Whole Nine Yarns. It is a nice group, smaller and therefore a little more intimate than on Tuesday knit night. As I'm not spinning for speed, it took me most of January to spin up all eight ounces. You can see from the bobbin at right that the spinning part went well enough.

After the roving was spun, I had more artistic decisions to make. It definitely had too much twist to be a single. (Somebody remind me to take a class on how to spin a good single.) I could chain ply it, but that would loose two-thirds of the length. I thought about plying it with a blue roving I had bought at Uncommon Threads. Instead of making an irreversible artistic decision, I worked on the blue roving.

Now, the blue roving took much longer than I expected. For one thing, I bought blue sparkles at The Mannings. But I don't have a drum carder. So I had to hand card blue sparkles into eight ounces of blue roving. This took a great deal of time. And then I spun up about four ounces of the blue roving, which took more time. At that point, I had three full bobbins (2 Louet Northern Lights, 1 blue with sparkles). I was able to finger ply the Louet to the blue and also the Louet on itself. Once I could do a side by side comparison, I decided to keep the Louet to itself.

So, I started to ply. And at some late moment, I realized I was not going to be able to get eight ounces onto a bobbin. I didn't want to cut my yarn. And in any case, I didn't have any empty bobbins, as I had two ounces of Louet on each of two bobbins, four ounces of plied Louet on a bobbin, and four ounces of blue with sparkles on a bobbin. I was thinking about ordering a spare bobbin. Then I looked on the Majacraft website and discovered the plying kit. For about $125 (depending on the exchange rate) and a couple weeks wait, my friendly local yarn shop was able to get the kit. It includes one oversized bobbin and one oversized flyer.

By this time, we were into the summer travel season. It was July, and I was headed back up to Pennsylvania. Fortunately I was driving rather than flying, because I pack like Auntie Mame with her eighteen steamer trunks. I got to my mother's house midway through the day. I let myself in. No pets. No children. No distracting adults. I was able to unwind the bobbin, with the resulting pile of yarn spread across the hardwood floor. And while I watched the evening news, I rewound the yarn onto the new bobbin. And I did all this while being careful to thread the yarn out of the old flyer and into the new flyer. It was worth the evening's labors. I was able to ply both four-ounce rovings together into one over 500-yard skein of worsted weight delight! 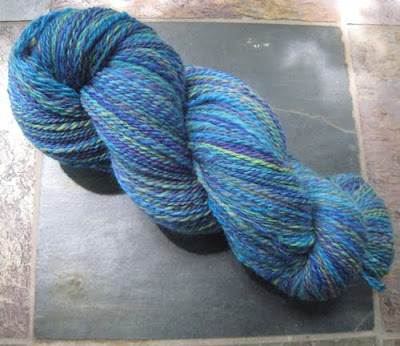 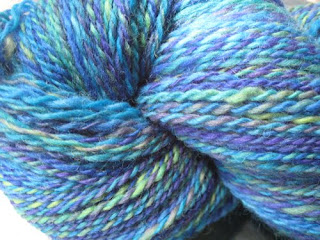 I hadn't brought my Strauch standing umbrella swift, so I had to wait until I got back home to Georgia to skein the yarn, steam set it, and determine the yardage. I'm still not sure what it will be when I knit it up. And I might combine it in a project with the blue sparkles, which aren't done yet. For the moment, I'm just going to enjoy it. And if you like this skein, remember that the roving is a standard roving that your local yarn shop should be able to get, rather than a specialty hand-dye that existed once five years ago. I am a beginning spinner. Even if you are also fairly inexperienced, you should be able to reproduce this yarn if it strikes your fancy.
Posted by Jolie 2 comments: 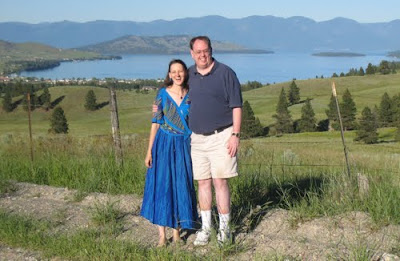 (Photo: Cuddy Hubby and I looking into a late afternoon sun with
Flathead Lake, Montana behind us.)
After two years and three previous blog posts (18 July 2008, 4 June 2010, 5 June 2010), I am elated to report that I have completed the Puzzlemaker Jacket by Kerry Ferguson. I completed it while on vacation in Washington State in late June. The knitting had been completed in Atlanta, but there was the matter of weaving in ends and devising a closure.

What I learned:
Even if you live in the South, cotton is not your friend if your project involves a lot of ends. I got the best results for weaving in mercerized cotton by splitting the plies and running them in different directions, then weaving the yarn back on itself and splitting it with a chenille needle. This is similar to the technique used in a Russian join or for weaving in ends on needlepoint canvaswork. There are triangles which took as much time to weave in ends as they did to knit. Changing the pattern from two colors to three only intensified this issue.

While part of my initial attraction to the pattern was the idea of picking up along the end of the previous triangle as you go, I think this project might be better worked as individual triangles later seamed together. For one thing, the combination of garter and stockinette tends to pucker, so it really needs to be blocked flat. I think it is easier to block individual triangles flat rather than a completed jacket.

Secondly, I am not certain that all the math on this garment is correct. I ended up cutting ten stitches off the right-hand edge of Triangle L, which forms the long diagonal right front of the garment. As that was the next to last triangle, I could tell from my well-established gauge that the edge of Triangle K was simply not long enough to pick up all the bottom of Triangle L. So I worked Triangle L as written, except that I pretended the last ten stitches on the right didn't exist. That adjustment did make Triangle L a little shorter as well as a little narrower, but that worked out just fine. There are a couple places where this garment sort of fits together, particularly at the shoulders and sleeves. If each triangle were worked separately, you could go back and make changes as you put it together if you discover it does not fit quite as you would like. But if you join as you go, it is much more difficult to make adjustments to fit. And I do have to say that the back fit together pretty well.

And speaking of fit and seams, I did make a couple short seams at the shoulders. The neck opening turned out to be a very wide boatneck. The seams I sewed are about the width of the blue border, so they fit in very nicely and make sense with the overall design of the garment. Without them, the sleeves would tend to drop off my shoulders to produce the retro Flashdance look. And if I were to make this garment again, I would not try to sew the bottom seam of the sleeves, but would just leave them to flutter.

I've made a closure using hooks and eyes. In the pictures I have two sets, but I might add a third or I might just seam the whole front closed. I don't know that I'd ever wear this jacket hanging open. I did paint the hooks and eyes to match the bright blue so they blend. And I sewed them on using a single ply split off from a leftover length of the bright blue cotton. 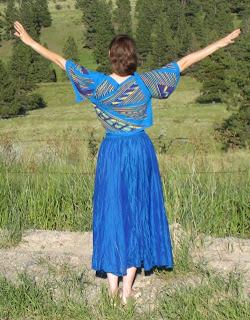 I should add that Abbi Barden at Martingale & Company was very kindly able to provide me with a correction for the "blob" problem on the Triangle I graph. I point this out because even if you don't wish to work the whole Puzzlemaker garment, I believe the individual motifs are worth consideration. Kerry Ferguson has a wonderful and rare sense of texture as well as color in her designs. I think some of the Puzzlemaker motifs would work fabulously on accessories such as mittens, scarves, or bags. I was able to get some wonderful pooling and flashing effects from the Schaefer yarn because the triangles are all smallish units. While I'm not 100% happy with the front of the garment, I love the bold graphic look of the back. Anybody who gets stuck behind me in a long line should be able to stay amused simply by contemplating the back of this jacket.

And just to add a little humor to this already long post, a few observations about Montana.

1. Cuddly Hubby and I both agreed, the sky really is bluer in Glacier National Park.
2. I now understand why Ted Turner wants to buy the state.
3. A place where people live "off the grid" in the middle of majestic nowhere and can be snowed in for several weeks at a time produces a population of self-sufficient, practical individualists who do not see a reason to waste highway funds on guard rails.
4. "Speed Limit 75 MPH." This is the only place the Cuddly Hubby has driven where he wasn't completely comfortable driving the posted limit.
5. Fishing is a basic human need. Other states have signs indicating where restrooms, food, fuel, and lodging can be found. Montana has signs indicating where access to fishing is available. There is an exit off Interstate 90 that doesn't go anywhere, it just provides access to a stream running along the expressway. After driving for two or three hours, don't you really need a quick fishing break to rejuvenate and regain focus?

Can we find a state to provide similar signage -- "Yarn Next Exit" -- for knitting?
Posted by Jolie 2 comments: