Earlier this month, I quickly knocked out a hideous crocheted dumpster fire ornament. South Cobb Arts Alliance hosts a Christmas House arts and crafts show each December. With it, they also have a tea room and silent auction. I believe Friends of the Mable House are also involved. Truth be told, I'm not sure which parts are executed by and for which organization. This group of events is a major fundraiser. The Mable House Arts Complex has a historic home, the art center with workshop and gallery space, and a concert venue. Throughout the year there are opportunities to gain skills in various arts, view and purchase art, attend concerts and live theater, and attend historic re-enactment. Sometimes the arts complex is just a good place for my local community to gather, such as for the farmers' market or food truck night.

I made the hideous dumpster fire ornament for the silent auction. I figured someone would connect to it. For many people, 2016 has not been a favorite year. John Oliver wrapped up Last Week Tonight for the season with a not-safe-for-work take on 2016. That was in November when we still had about seven weeks to go.

Well, 2016 has embraced its character. If you are going to play the chaotic alignment, then by golly dig in and be chaotic. In the last week we have lost George Michael (on Christmas Day!) and Carrie Fisher. George Michael's album Faith was probably among the first five CDs I bought when I got a CD player in the mid 1980s. That CD was a significant part of the soundtrack of my days in graduate school. Cuddly Hubby and I have the poster triptych for the Star Wars trilogy reissue of the last 1990s hanging in our master bedroom. So, yes, there is a picture of Princess Leia in my house. Geekdom and Generation X suffered notable losses this year even before this week. (Yes, I know Carrie Fisher and George Michael were technically Baby Boomers, but their contributions to popular culture strongly impacted Generation X.)

Thus, I offer to you a crafting option to help celebrate/commemorate/obliterate 2016 in all its, um, glory. 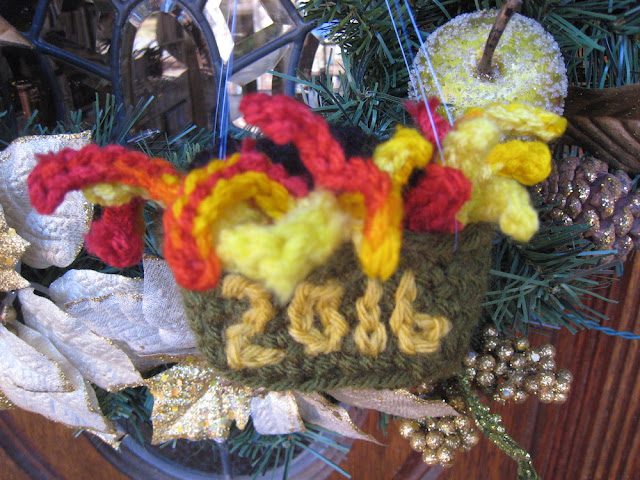 I don't normally write crochet patterns. This one is free, because I'm sure there are better ways to do this; but I don't know them yet. If you want to download this file for free, it is on Ravelry.

Round 3:
Working into the back loop only:
8sc,
6sc,
8sc,
6sc.
Please do not work extra stitches in the corners.

Fire
The fire part is a hot mess!
Firstly, I used Red Heart Super Saver in the Mexicana color way, which is essentially a classic rainbow. I wanted to purchase separate skeins of red, yellow, and orange, but the store was out of orange that day. I didn’t need the green-blue-violet part of the multicolored yarn. I ended up “editing” the yarn by cutting it into little pieces and then joining the 13 pieces of red-orange-yellow yarn using Russian join (sewing them together). I joined red to red and yellow to yellow, which means the red and yellow parts are twice as long as the orange parts. It would be much easier to just purchase a red-orange-yellow variegated yarn.

The fire part is worked randomly and side-to-side. It is mostly chain stitches with a few single crochets for the base. Also, I worked the single crochets from left to right — i.e. left-handed rather than right-handed. Here is a description of what I did and a picture of what I got. Competent crocheters, I have no doubt you can improve upon this. 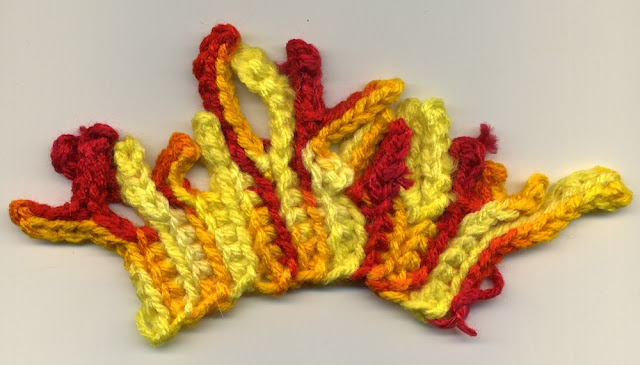 Because I was pressed for time, I only made enough fire to edge the dumpster. Ideally, you want to do a whole lot of fire and fill it up! I didn’t have enough, so I had to use stuffing to fill the dumpster.

Use chain stitch and mustard yellow yarn to add “2016” to the front (lower of the two long sides) of the dumpster.

Use tails to tack fire to inside of dumpster.

Use black tails to tack dumpster lid down.

Use fishing line at all four corners to create a hanger.
Posted by Jolie No comments:

If you've been reading this blog for awhile, you know I have passions beyond fiber arts. I have a lifelong passion for giant pandas. I'm fortunate to live in the very best city in the whole United States when it comes to pandas. When I moved here more than twenty years ago (yes, before the 1996 Centennial Olympic Games), there were zero pandas in Atlanta. At that time, the only panda in the United States was the geriatric Hsing-Hsing at the National Zoo in Washington, D.C.

Lun Lun and Yang Yang arrived here in Atlanta in the fall of 1999. I have been a fan ever since. For me, there are few places in the world better than the panda exhibit at ZooAtlanta.

And congratulations to the care staff at ZooAtlanta and their colleagues from Chengdu Research Base. Lun Lun has had five successful pregnancies and seven cubs. I like to think Lun Lun's beautiful face and Yang Yang's playful temperament will always be represented in the giant panda gene pool.

I do hope the Chinese will please remember that, whether you like him or not, our president-elect is not terribly strong even at American etiquette. Forgiveness might sometimes be needed. And I hope our new administration will please remember that etiquette is an important element of Chinese culture. Politeness sometimes matters. Many people regard the relationship between China and the United States as the most important international relationship today. I am glad the town I call home is doing a little bit to make this a friendship.
Posted by Jolie No comments: