Off Topic -- Panda Cubs on PandaCam

Those of you who know me know I love pandas. And I specifically love the pandas at ZooAtlanta. I was a docent about a decade ago and can still tell Lun Lun and Yang Yang apart. Yes, I am one of those crazy people who looks at Mei Lan (already in China) or Xi Lan or Po and makes comments about which parent they resemble in which way, while the rest of the world just sees another black and white bear. The latest iterations -- Mei Lun and Mei Huan -- are entering the dangerously cute cub stage. Just viewing them on PandaCam can cause metabolic anomalies requiring insulin injections to offset the sweetness. They are also finally venturing into the exhibit dayrooms. Xi Lan and Po will soon relocate to China to join the breeding program at Chengdu. If you are in Atlanta this weekend, you have the rare opportunity to see up to six pandas of various ages all in one place.
Posted by Jolie 1 comment:

I pre-ordered Tudor Roses back in June. I was excited the book would be back in print. The 1998 original features a dozen beautiful designs. Some are Fair Isle with Alice Starmore's brilliant sense of color. Some are cables. In particular, I had been lusting after the pattern for "Henry VIII," which is a sweater surely fit for a king.

I had been stalking the book for awhile on the used book websites. I should have bought it when I saw it for a mere $150. But then Sweater Quest by Adrienne Martini came out in 2010. Adrienne wrote about her year-long quest to knit "Mary Tudor," the cover sweater. After that, prices on Tudor Roses went into orbit. In the meantime, some of Alice Starmore's other out-of-print books began to reappear. I decided to bide my time. "Patience, Iago, patience!"

So when I saw the opportunity to pre-order Tudor Roses, I couldn't click the "it must be mine!" button fast enough. And when I saw the book was shipping a month early, I was happy. And when I saw the e-mail predicting its arrival today, I was truly delighted. And when I went to the mailbox, and saw the cardboard box stuffed inside, I pulled it out and stroked it. And I brought the box inside the house, and set it triumphantly on the kitchen table, and opened the box. Happy Monday! 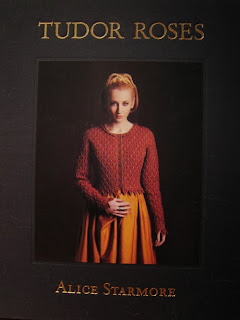 This tome is substantial. The cover is dignified. The title page has a lovely geometric motif and a quote from William Shakespeare himself. It is truly a beautiful book that demands to be noticed.

But I was curious, when on the fourth page, the copyright notice states,"Tudor Roses, first published by Calla Editions in 2013, is a revised and expanded reimagining of the edition published by The Broadbay Company, Fort Bragg, CA, in 1998." In the whole copyright notice, the only item listed as copyright 1998 is the sonnet on page 5.

You have been warned.

There are 14 patterns in this new edition. All are beautifully photographed and styled, although most of the photographs show the full garment, rather than illuminating details. Each pattern is introduced with a few paragraphs of biography, written from the point of view of the lady being honored. There is an excellent family tree and some historical background on the Tudors. And there are little colorful motifs here and there on the pages, filling in places where too much white space would be jarring. So this book scores a perfect "10" on romance, style, and beauty.

Some of the color changes and updates are nice. My point is not that these are necessarily bad; rather, if you anticipate purchasing this lovely coffee-table book instead of paying a premium for the 1998 edition, be sure that the new version contains what you want. You may very much like "Mary Tudor" in her new color scheme; but if you want the previous color scheme, you are out of luck. If you liked "Anne Boleyn" or "Jane Seymour" as they were, then this book is little or no help. And there are no color charts or other information about the yarns -- all available from Alice Starmore through her website at www.virtualyarns.com. You'll need to do a little hunting if you want/need to substitute yarns, especially in the Fair Isle sweaters.

Also, this is definitely a book for knowledgeable knitters. I haven't knit from it yet, so I can't comment on the accuracy of the written patterns. The patterns are mostly written-out with standard abbreviations. There are schematics, and the charts are large and clear. I do notice there are no tutorials about how to cut a steek, work stranded colorwork, or cast-on or bind-off, or any little diagrams of how to do unusual maneuvers. However, you probably already have Alice Starmore's Book of Fair Isle Knitting or her Aran Knitting on your reference shelf.

Bottom line: A breathtakingly beautiful book of beautiful sweaters. Now, can anybody lend me the 1998 edition so I can knit "Henry VIII?"
Posted by Jolie 2 comments: