Sometimes part of the fun of writing a knitting pattern is coming up with unique instructions. For awhile, I've wanted to write a pattern that ends with, "Tie yarn securely to the roof of your car. Drive around for a couple weeks. Untie. Attach yarn 'feathers' to project."

Unfortunately, I have discovered this works only for very specific yarns.

Those of you who have seen my car in person may know that I typically have a little streamer "poof" coming off the radio antenna. This is made from several strands of Filatura Di Crosa Timo in color 13. Sadly, this yarn has been discontinued. I only change out the streamer about once a year, so I figure my one skein (60 meters) should last the life of the car.

I purchased this particular yarn because I was looking for a ribbon yarn in a colorway that would look good with my very red little car. What I did not realize was how the yarn would change when tied to the roof. The ends start out plain. 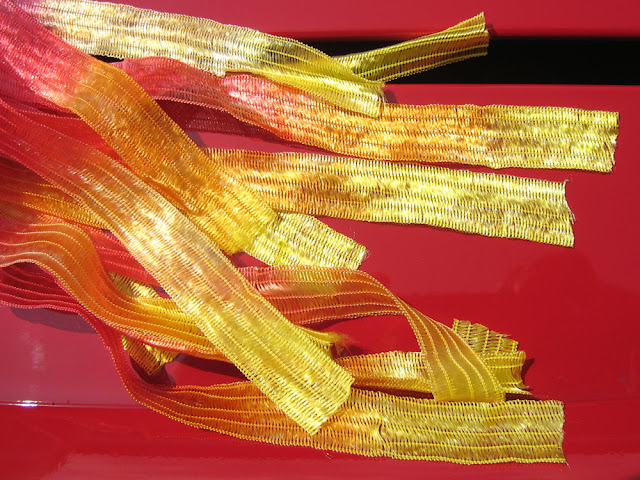 But after driving around for awhile, they feather. 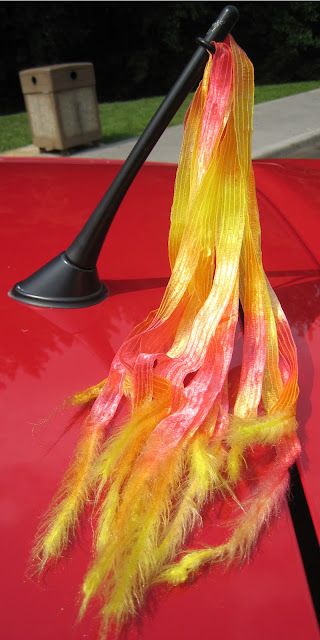 A couple years ago at Georgia FiberFest, I bought an art batt in the ‟flame thrower” colorway from Alpaca Trading Post. This was a wonderful batt with all sorts of different textures. I spun it up into over 75 yards of corespun goodness. The art batt included a couple yards of ribbon yarn very similar to Timo. I decided the feathered texture would be great fun. So, I dutifully cut the ribbon yarn into smaller sections and attached it to the roof of my car. I drove from Maryland to Georgia. I drove around Atlanta. I drove in the rain. I don't remember how many miles I put on my car, but this yarn would not feather! 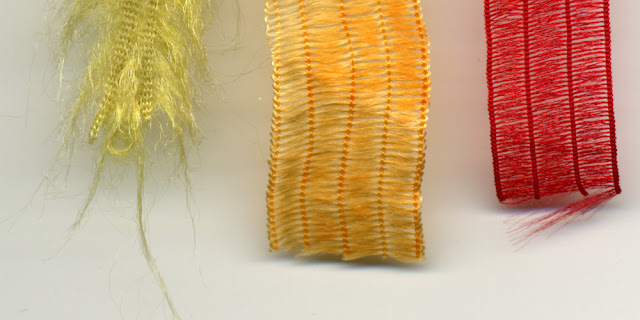 As you can see in this ultra-closeup, both yarns appear to be the same construction. (Timo, both feathered and un-feathered is on the left.) It looks to me as if the central stitching migrates to the center and the weft breaks at the edges. I have no idea why one will feather and one will not. Ideas, anyone?
Posted by Jolie 2 comments:

In early summer I was knitting projects quickly. It seem that knitting is much faster than pattern-writing, photography, videography, and all the other elements that go into self-publishing a pattern.

For the Mach Wave cowl, I decided to use some stash yarn. I had purchased Wool2dye4 Tweed Worsted in a "learn to dye with Kool-Aid" kit at The Whole Nine Yarns. This yarn has three plies, two of which are wool and the third is superwash wool. The third ply takes dye differently from the other two, creating the tweedy effect. I did quite a bit of outdoor dyeing back in June. That first burst of scorching summer weather triggered the impulse to execute the dye projects that had languished through the cooler months.

Although I have a big pile of Kool-Aid packets in my dyestuff stash, for this project I used Jaquard acid dyes. Before applying the dye, I decided I wanted the skein to become a center-out möbius. I divided the yarn into 11 lengths, placing a pin at each division. (Note to self: Next time, take the pins out as soon as possible. They will rust!) I wanted the stripes to be the same width. If the möbius is worked center-out, then the first color needs to be half the length of the remaining colors. Thus, the first color section was only one length, while the remaining color sections were two lengths. 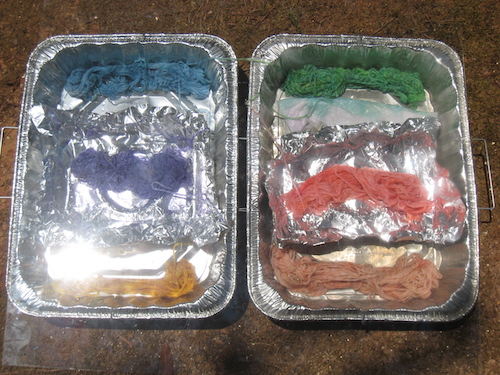 I laid everything out in aluminum pans, covered them with clear Plexiglas, and let the yarn bake in the sun for the day. 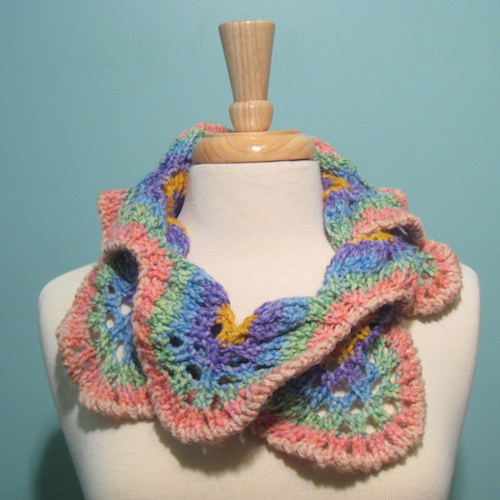 If you are working your way up the reversible lace learning curve, this in an intermediate project. The cast-on is Cat Bordhi's möbius cast-on. The lace pattern itself is a fairly basic reversible lace pattern. If you don't like the möbius shape, you can make a cylindrical cowl instead.

In September I'll be teaching a series of classes on reversible knitting at Georgia FiberFest. The festival will be producing their own magazine this year, and I've submitted Mach Wave for inclusion. You can also find the pattern as a paid download on Ravelry.
Posted by Jolie No comments: