It all started with cleaning out the stash.

After I acquired significant new stash at the fire sale, I needed to put it all away. I do have a wall of not one but two Ikea 5×5 cubbies. That's 50 cubbies! (By the way, while you can fit two of these flat-packed into a 2007 Honda fit along with yourself and a 6'2" cuddly hubby, it is maybe not the best idea. Re-roll that Wisdom check.) Revisiting the stash reminded me of dreamed-about projects yet unrealized. And I needed to use up yarn and fiber so I could make more room. There were six skeins of Noro Kureyon Big, a bulky-weight yarn. I knew I wanted them to become an up-sized Jester Tentacles Bag. As that looked like a quick way to generate open storage space, I gleefully cast on.

I worked the möbius cast-on. I made the strap. I made the interior bag at the same size as the outer bag in the original pattern. I worked three of the eight tentacles. And by this point, I had used up 4½ skeins. I began to suspect I might need another skein. I ripped and re-knit the strap so it used less yarn. I asked five different people on Ravelry if they could spare, sell, or trade any Kureyon Big. No luck. I let the project languish in time out for a month. Then one day, I decided just to go for it! I finished the remaining five tentacles and knit towards the bottom. As expected, I came up short.

Since I am a spinner, I decided to try making my own matching yarn.

I started by scanning Kureyon Big at 12,800 dots per inch (the picture below is about 0.2 inch/0.5cm diameter). What looked like purple and black at normal magnification looked like this instead: 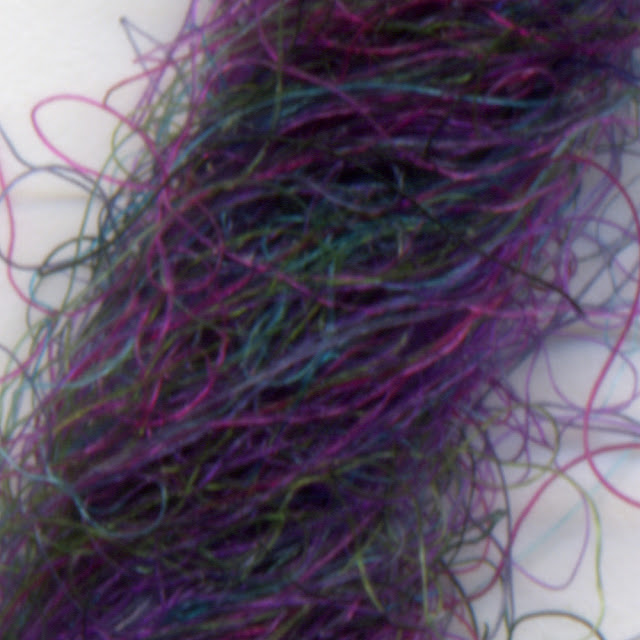 If you read my post last summer about optical illusions in spinning, then you know a little about optical mixing. Part of why Noro colors are so beautiful is because they are optically mixed. When magnified, dark purple and blue-black become bright green, fuchsia, purple, violet, and aqua. This is also part of the joy of spinning. Many yarns are dyed after they become yarn. When you dye fiber and then blend, you get the complex color beauty of optical mixing.

I decided to use a freebie merino fleece to mimic Noro. Please add "recalcitrant" to a long list of reasons this was a free fleece. I even tried letting the dye baths soak overnight, but the color would … not … take. Finally, I gave the already-scoured fiber a rinse in Dawn dish washing liquid. I put about 5 grams of fiber in each jar, added dye bath and a splash of white vinegar, and set the jars in a large pot with water. I brought the water up to a simmer and let it stew for an hour, similar to what you would do for canning. That worked. I got the fiber to take the color.

But even with the dye taking and some play with mixing different colors,  I still couldn't quite get a color match. And I began to worry that my handspun wouldn't felt at the same rate as Noro.

Finally, in a fit of pique and frustration, I decided to search the Internet. Surely there would be some Noro Kureyon Big out there somewhere.

But, there were some Noro products on Webs. They had something called Noro Rainbow Roll, which is basically Noro pencil roving. Ah, ha! Except, it didn't come in the colors I needed. Phooey! But they also had Noro Kureyon Air. Kureyon Air is a super-bulky yarn rather than bulky yarn; but it came in a coordinating colorway. I purchased one skein.

When the yarn arrived, I took it to my Majacraft Rose wheel and, using the slowest whorl (4.25:1) and a large (plying) bobbin, I deconstructed the yarn. It divided into two pairs. 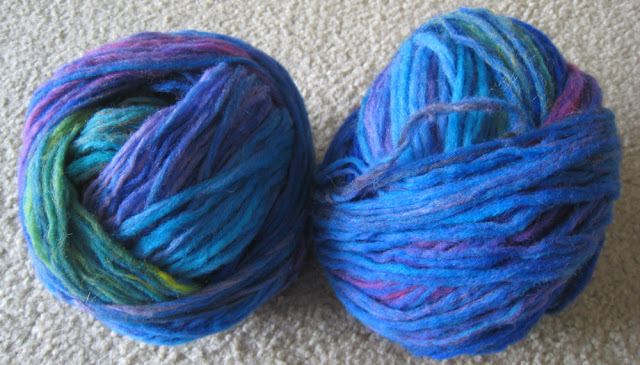 This looked suspiciously like barely-twisted pencil roving. Using the same whorl, I ran the pairs of roving back through the wheel, this time twisting to hold it together. There was a lot of editing to maintain the gradient by breaking off and rejoining back and forth between the two separate sources. But in the end, I had transformed a 2×2 cable yarn into a 2-ply yarn. I ended up with 210 yards.

At that point, it was easy to finish the knitting by simply working round and round to the bottom. I used dental floss to tie in plastic bags resists (to keep the tentacle pockets from felting closed). Then it was just a matter of throwing the whole floppy purple octopus-thing through the wash.

The bottom of the bag looks a little different — the colorways weren't identical. But I think it looks like an intended design feature, rather than a mistake. And I am pleased with the size. The largest tentacle took an entire skein of yarn. It is, however, large enough to accommodate my favorite no-spill travel mug. And other tentacles will accommodate a cell phone or wallet. 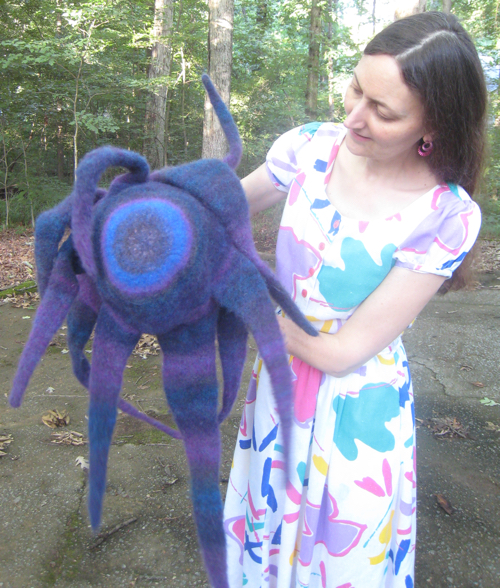 Binding Off at a Point

In the Kennesaw Kudzu pattern, each multiple of pattern is worked back and forth and decreased to a point. This shaping creates the pretty leaf edging. But it does raise questions of how to deal with those final two stitches and where to hide the tail when you are out at land's end?


To graft that final knit-purl pair, start with “wrong” side facing:

I prefer to duplicate stitch ends. In this case, I don't have any horizontal fabric that I can use for duplicate stitch. Plan B is hiding the ends vertically. Identify a knit wale and thread the tail down through a vertical column of stitch legs. This isn't my favorite way to deal with an end, but it will work in a pinch.
Posted by Jolie 1 comment:

In addition to the hat and the toe-up socks, this cast-on would be useful to work a circular shawl in reversible lace.
Posted by Jolie 1 comment:

I said I would blog more about my winning entries at Maryland Sheep and Wool.

One of the entries was a hat. This was the winner in category K14: Miscellaneous knit from commercial yarn. 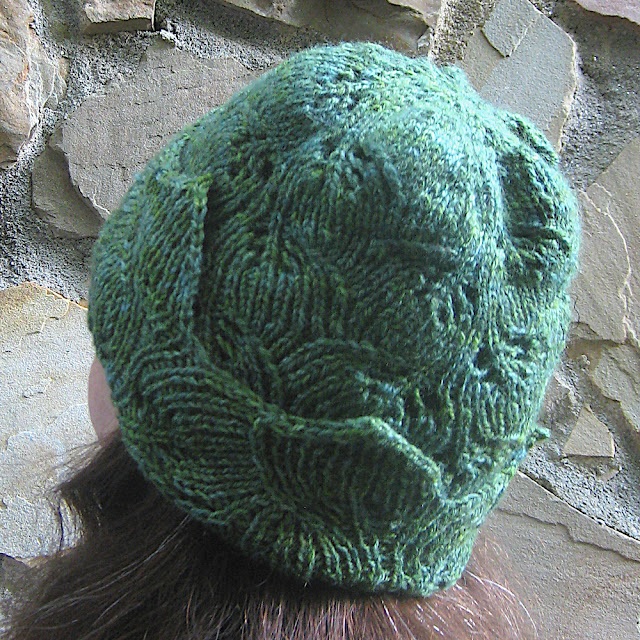 The design started out as socks. 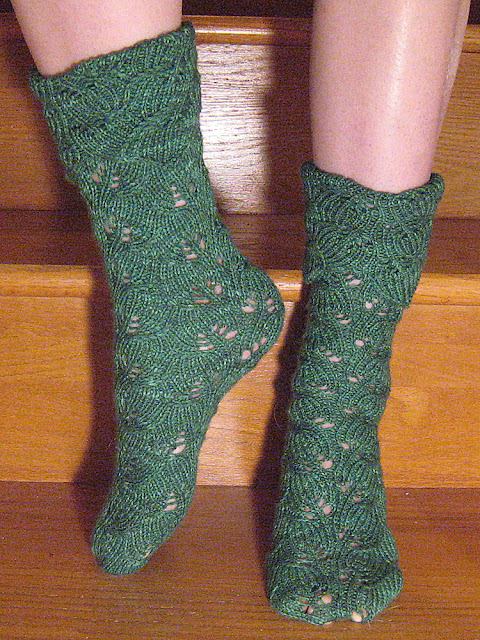 For the sock pattern, I decided to investigate just how stretchy reversible lace is. Socks normally have a heel turn. For some sock knitters, this is part of the fun. You work in the round for awhile, sometimes in pattern, then you have the excitement of a heel turn, then you work in the round some more. For others, this is exactly why they don't knit socks. For many people, working in the round without increases or decreases is perfect television knitting. Paying attention to a heel turn is not. And of course, there are multiple ways of dealing with heel turns. So many choices! So many options to like or dislike.

While I typically enjoy the challenge of a good heel turn, I sometimes don't like the design options. If I'm working a pretty lace pattern, there is the challenge of marrying the pattern with the heel turn. There is, of course, the option of working tube socks. Many people do not like tube socks because they don't fit well. After all, there is a right-angle turn where a foot and a leg meet. Making a sock without that turn means the sock and the foot don't match in shape. But knitting also stretches. Recall my post about negative ease. The reason socks are knit rather than sewn — and have been for hundreds of years — is because knit fabric can more easily take on the shape of the underlying body than woven fabric can.

Reversible lace can stretch a lot. This means socks, hats, or other garments can stretch to fit a variety of sizes. In this case, reversible lace stretches enough that you can knit a tube sock. Once the lace pattern is established, you don't need to interrupt it to turn the heel. If you are unconvinced or just uncomfortable with the idea, I did include instructions to increase and decrease in pattern if you would like more fabric in the heel. You can also use the increase instructions if you are making knee-high socks and want more room for shapely calves.

The socks were worked toe up. I like this type of construction, because I can work until I run out of yarn and minimize waste. I loved the leaf pattern, but I realized when I was about to bind off that simply stopping at the end of the repeat would cut a row of leaves in half. I wanted to emphasize the leaves. It took a couple days of swatching, but I was able to figure out how to bind off each multiple of pattern individually by working back and forth to continue each leaf. Yes, this meant more ends to weave in. I feel the effect is worth it. The edging was so pretty on the socks, I knew I had to try it on a hat.

The hat is worked from the same pattern and chart as the socks. The only difference is in the first few setup rows, number of multiples of pattern, and gauge. I've named the pattern Kennesaw Kudzu. "Kudzu" because in the south what else would a pattern of leaves spreading everywhere be? "Kennesaw" is the name of a mountain here in Cobb County, remembered as the site of a Civil War battle.

As per my usual practice, over the next few days I will post video support for this pattern.
Posted by Jolie 1 comment: