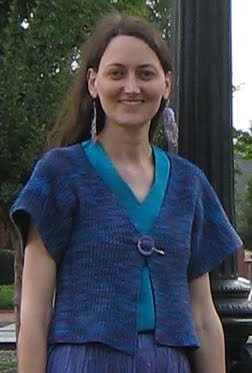 I wanted to have something a little special to show in my "More Than One Way to Skin a Sweater" class back in April. This plain cropped jacket has an unusual construction method which I call "origami" because it can be represented by a rectangle that is cut and folded.

You'll recall this jacket is worked in linen stitch. I only had the one large skein, so I weighed it. This allowed for me to make calculations as I knit. How much fabric did I have? How much yarn had I used? How long could the sleeves be without running out of yarn? These questions can be answered with some confidence if you weigh the skein before beginning and at intervals as you knit.

I crochet cast-on at the bottom edge and treated the bottom part of the jacket as a rectangle. I planned and used about 35-40% of the skein. When I got to the underarms, I folded the rectangle as if it were the bottom of a cardigan -- right front, back, left front. I was at the beginning of a right-side row, which meant I was on the right front edge. I then knit one-quarter of the way across my rectangle and provisionally cast-on what was needed for the sleeve. I then knit the upper right portion of the sweater up to the shoulder, leaving the stitches live. At this point, I had to break the yarn, provisionally cast-on what I needed for the left sleeve, and knit across the quarter of the rectangle that was forming the left front. Once again, I knit up through the shoulder and left the stitches live. I had to break the yarn again, but I left a yard or two for a future shoulder seam. Now I flipped my garment over and picked up in the provisional bottom of the right sleeve, across the back (the middle half of the rectangle), and across the provisional bottom of the left sleeve. From there, I knit to the top of the shoulders. Once again, I left the stitches live.

At this point, the shape I had was very similar to a baby surprise jacket! I guess that shouldn't be surprising, as both methods yield a garment with seams across the shoulder. I used a very tidy three needle bind-off to join my live stitches from cuff edge towards the back of the neck. When I ran out of stitches for a three-needle bind-off, I continued to bind off the back of neck stitches to the center. So both yarns met at the back of the neck, where I secured them neatly and wove them in. 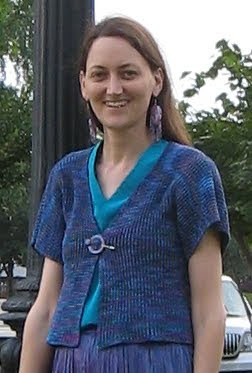 I did a little bit of shaping on this project. Because it is a reversible fabric, I could have knit straight to the neck with no shaping and turned back the fabric to create lapels. But I was a little nervous about my yarn consumption. I worked the upper part of the jacket only an inch or two before I began decreasing on every row at the collar edge. (The decrease is every row because of linen stitch. It would be every-other in stockinette.) When the opening became wide enough, I stopped shaping. I also worked a few short rows for shoulder shaping. I configured the short rows by taping paper to the wall, standing against it, and having my husband trace the outline. I used that shape as the template for the short rows.

I also worked a twisted slipped stitch at all edges -- slip 1 knitwise with yarn in front at the end of a row, knit the first stitch of the new row through the back of the loop. Because I used the crochet cast-on, all the raw edges on this garment have a chain edging. I do have about 10% of the skein remaining. The plain cropped jacket is very much in style now, so I have been wearing it with a closure from Purdy Thangz. But if I later decide that I want a band or edging, that can be easily added all around by picking up in the chain stitch. And if I use the remaining Rainbow Mills Crayons Lite, I should be able to get it to pool or flash in a way that contrasts with the garment.

Because of both the linen stitch and the cotton, the fabric for this garment very much resembles a woven fabric. (For close up views, see this post from March 2010.) It also behaves more like a weave, both with less stretch because of the content and also because of the stitch pattern. If you worked this in wool or a more elastic fiber, you might be able to eliminate the short-row shoulder shaping.

(Photo at top left is "right side" of linen stitch jacket, photo at bottom right is "wrong side." Both are good!)
Posted by Jolie 1 comment: