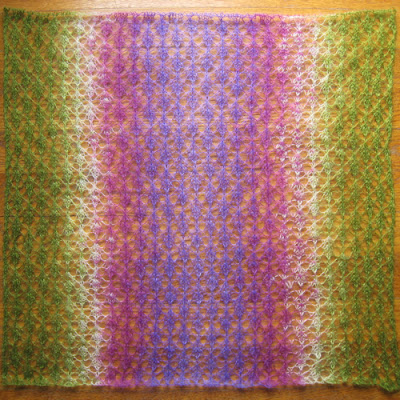 As I mentioned yesterday, I did work on another small project. In this case, I knocked out a square for the TNNA Great Wall of Yarn. The yarn this time is lovely stuff -- Sweet Georgia Silk Mist. This is obviously a Rowan Kidsilk Haze substitute. If you don't know what to do with it, you can browse the 1000 pages (no exaggeration) of Kidsilk Haze projects on Ravelry.

I decided to work a little lace with the color stacking, so as not to muddle the beautiful spring colors in the skein. I used a provisional cast-on, leaving enough tail to be able to bind off later. After only a little fiddling, I was able to determine that something around 88 stitches would stack for me. I found a stitch pattern from p.71 of The Haapsalu Scarf by Siiri Reimann & Aime Edasi that would fit over 85 stitches, plus two for the selvedge is 87. So I cast on and knit using a US size 7 (4.5mm) pointy needle.

On the downside, this did not go as quickly as I would have liked. Partly I did not spend as much time sitting and watch bowl games with my husband as I anticipated. (He is determined to watch all 9 of the Pac 12 bowl match ups.) Partly the pattern took a little longer, especially since there are 14 double-decreases on every right-side row. But the pattern is only an eight-row repeat, and thus encouraging as you pass a milestone about every hour.

I worked until the swatch was square, then blocked it overnight using blocking wires. (Note to self: must find new and stiffer wires, as my set is sadly no longer straight.) In this case, I spread the wired swatch out on top of a white towel on the carpeted floor in the guest bedroom. I pinned through the carpet, spritzed the swatch generously, then left a box fan blowing on the whole array overnight. 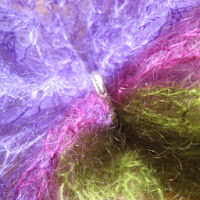 In the morning, I bound off both the top and bottom using a sewn bind-off. The advantage of this technique is the loose tension, which can be manipulated to match the gauge of the knitting and thus not disrupt the color pooling. For lace, I really do prefer to bind off after blocking, as laces may grow beyond expectation when aggressively blocked.

The final swatch is 21 inches square but uses only 15g of yarn or a mere 0.034g per square inch. It is a diaphanous square of lace that can be pulled through even my rather small wedding band. While the mohair does not frog well, it also holds the pattern in place. If your needle falls out, the stitches tend not to go anywhere. And when you weave in an end, all those sticky hairs will keep the end in the fabric. Truly a lovely swatch that sings a siren song of lace shawls yet to come.
Posted by Jolie 2 comments: 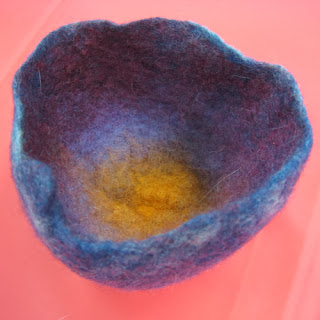 As you might guess from the lack of blog posting, the holiday season has been full of distractions. I spent three weeks over Thanksgiving at my husband's Maryland man cave. In addition to celebrating the holiday with family, I did accomplish some knitting stuff. I was most pleased that I worked on writing up a scarf pattern that uses an interesting entrelac technique. I had been most annoyed at myself for the lack of progress on that pattern, and it felt good to spend time writing and test knitting and making progress. Then I got home to Atlanta to discover that files written in Pages ’11 on my husband's computer don't open in Page ’09 on mine. (A pox on whoever in Cupertino, California decided that was a good idea.) Fortunately, Cuddly Hubby came home for two weeks during the end-of-year holidays. I've been able to open and export the file, thus restoring the three weeks' of work I did writing and test knitting. Of course, now that I'm in the middle of the holidays, I haven't had the time to get back to it. We'll hope for better in 2014.

So, while I couldn't work on that project, I put my focus elsewhere. I've knocked out two small projects and third, a hat, that I'll hold off on posting until the matching gloves are finished.

The first small project was a small bowl for the SEFAA gift exchange. Initially, I thought I'd knit a somersaulting rim trifold bowl from Cat Bordhi's wonderful A Second Treasury of Magical Knitting. I had some Bernat Roving acquired in the NGKG annual auction this year (for a whopping $2). Large yarn. Big needles. Knitting in the round. I figured I'd knock this out, felt it in the wash, and have a fine gift. I was about an hour into the project and working on it at Whit's annual blocking party, when Barb asked, "What yarn is that?" As I reached over to pick up the label, I noticed the fiber content: 80% acrylic, 20% wool. That will not felt. If you are looking for the wooly look of Brown Sheep Lamb's Pride Bulky, but do not want your project to felt, then Bernat Roving might be an option. If you are looking to make a felted bag or slippers, move along. 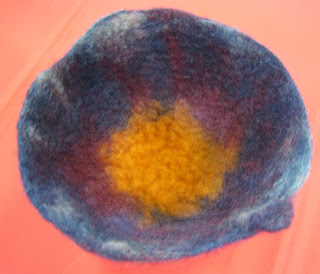 In the end, I went to my stash of Skacel Artfelt paper and Schoppel Wolle rovings and made a felted bowl. The roving had a color gradient in it reminiscent of sunsets or fire. I cut a square piece of Artfelt paper, then snipped it in eight places so I could overlap the "petals" to make it roughly bowl-like. I tacked down wisps of overlapping fiber in a couple layers to create the bowl.

To felt it, I made the bowl wet. I took a pair of socks, wrapped them in plastic wrap, and put them in the center of the bowl. I did this to discourage the bowl from felting in on itself. Then I wrapped the outside of the bowl in plastic, put it in a nylon knee-high stocking, and threw it in the dryer for about 20 minutes. I was surprised by how much it felted. It was a medium-sized hold-in-two-hands bowl before felting. It came out small and cute and fits-in-one-hand sized. And the whole process took maybe two hours.

I found it interesting that the interior and exterior look a little different. As this is a felted bowl, it can be turned inside-out based on which side you like best. And it did felt nice and dense. In fact, it maybe came out a little too dense. On the other hand, better to be too stiff than not stiff enough if you are trying to make felt pottery.

Tomorrow: the other small project.
Posted by Jolie No comments: