A decade ago, I was president of Atlanta Knitting Guild. The very first STITCHES South was on the horizon. I had just lost a dear cat (Copernicus), but did not realize I would lose the other one (Sophia) in a few months. In October of 2008, I had a falling out with a very dear friend who helped me fight off the clinical depression monster. That broken friendship would not be mended for almost a decade. I was making friends at The Whole Nine Yarns, but did not know I would lose one later that summer.

Here we are, a decade later. I lost a cat (Brûlée) in November. This time, I will not be surprised if I lose the other one (Vincent) within a few months. I lost my knitting mentor, Jan Stephens, back in September. We lost two other North Georgia Knitting Guild members in 2018, Claudia Pergason and Christine Cardenas. I was thinking that maybe 2019 would be different. Instead, we lost our North Georgia Knitting Guild newsletter editor, Nadine Kelley, on the first day of this new year. It isn't feeling very new. 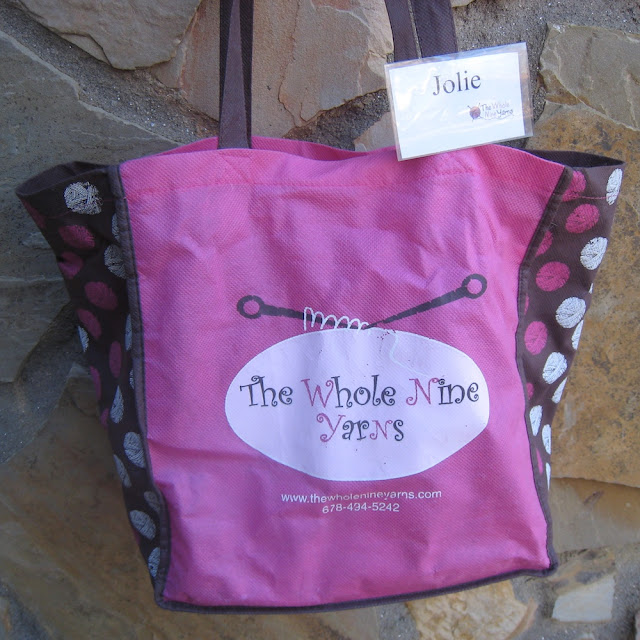 On the second day of this new year, I found out what all of you now know — The Whole Nine Yarns is closing its doors in six weeks. For me, it has been more than a yarn shop and more than a place to teach. It has been a community. I remember driving to Woodstock on the day my knitting muse, Bruce Corrigan, died. It was a Tuesday, which meant knit night. I remember hugging Jenna and crying and crying that Bruce couldn't possibly be gone. The man had season tickets to the opera! He had plans. He had unfinished lace shawls. He needed to be here. But I also celebrated publishing in the magazines. It was exciting when the Fall 2017 issue of Spin-Off came into the store with my article inside. It was great to celebrate life milestones with other people. Watching Gabby's journey of marrying and becoming a mother brought great joy. I will be sorry the shop will be closed when Gabby's new baby arrives later this year. Even when I traveled and was away for several weeks, stepping back in the shop always felt like coming home. Often there would be a serendipitous meeting of someone I hadn't seen in awhile. A couple of times Bruce's sister, Patty, dropped in when she saw my car parked out front.

On the third day of this new year, my father-in-law, Jim Barron, passed away. I wasn't close to my in-laws. They lived on the West Coast, so I typically saw them only every few years. But they were good people. If the measure of a man is to count his friends, as Charles Dickens proposed, then Jeff Bezos is a pauper compared to my father-in-law. He had worked in agricultural extension and had friends everywhere. There are many tears to cry.

Late in the evening on the third day of this new year, Tom Britton, president of South Carolina Knitting Guild, passed away from a heart attack. Tom was somebody I met through travels and shows. His enthusiasm for life and knitting were infectious. And he hugged a big, warm greeting as if he had been waiting all year to see you again. His light burned bright.

While Cuddly Hubby has been home for nearly a year, his temporary assignment to Georgia is wrapping up. By the end of January, he will be working back in Maryland.

When STITCHES United starts 125 days from now, much will have changed. That whole area of Cobb County looks different. There is a baseball field where the duck pond used to be. There are express lanes and new highway at the interchange between I-285 and I-75. There is a pedestrian bridge connecting Cobb Galleria Center with Suntrust Park. There is a new bigger and fancier electronic sign for Cobb Galleria. Instead of a little shopping center strip on the other side of the expressway, there is indoor skydiving. On the other side of Cobb Parkway, Cumberland Mall has been transformed.

But I will also pause and notice what is missing. The little Volkswagen Beetle advertising The Whole Nine Yarns won't be parked near the entrance to the convention center. Mark and Suzy from Kollage Yarns won't be sponsors, as they have sold off and dissolved their business. Bruce won't be there. I may be down to one or even zero cats. I won't be president of Atlanta Knitting Guild.

But I must also pause and notice what has appeared. There will be other fabulous vendors. There will be new friends and friends I have met in the last decade. North Georgia Knitting Guild is no longer a new little guild taking its first steps; it is a vibrant established guild in its own right. In time, I like to think there will be a new pair of wonderful knitter's cats. And instead of being a guild president, I will be a teacher at the show.

Cuddly Hubby reminds me that aging is often about giving things up. You realize a particular hobby you once loved has been ignored for years. You change out an old goal for a new one as life takes a different direction. You clean out the house to make room for whatever is coming next.

Update on Monday 7 January: And I just found out from Alasdair Post-Quinn's e-mail newsletter that the fabulous online knitting magazine Twist Collective has dissolved.
Posted by Jolie No comments: