I realize I've been rather un-chatty the last few months. So, what has been happening?

The autumn knitting did not all go according to plan. I started off with a plan to have a new class on short rows. Gabi suggested I pick a good project to sell the class, so I chose "Dreambird KAL" by Nadita Swings. There are over 3000 of these on Ravelry. It is a popular pattern, and I figured I would just knock mine out over Dragon*Con weekend. Well, it turns out this is not the easiest pattern to follow. There are a couple places in the pattern where people are making tweaks. I think I started and ripped this thing three or four times before I finally figured out what I liked. The pattern is worked in feather-like sections I call a "quill." Each quill typically took 2-4 hours for me to knit, depending on how much I concentrated and whether I made a mistake and had to rip back. My shawl has 21 quills. But, the final project is flattering. 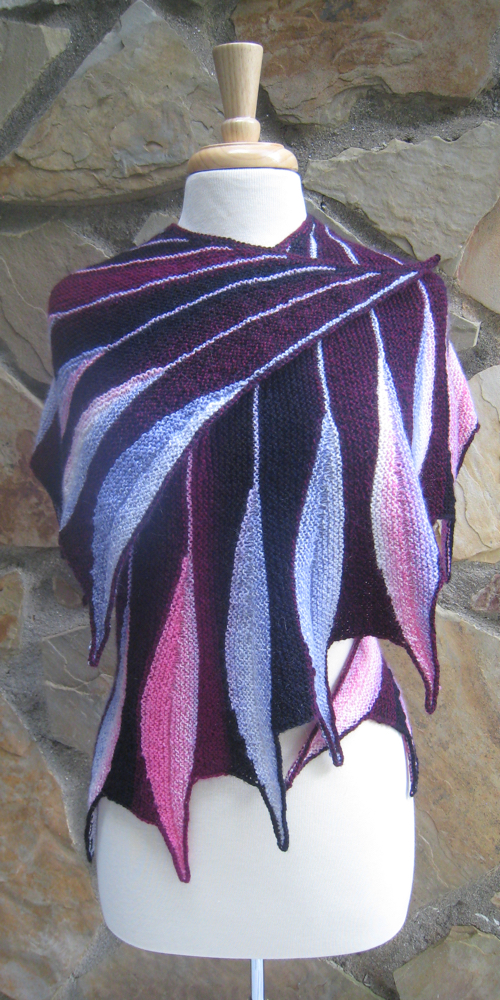 In the end, I completed re-wrote the pattern. When I read the comments on Ravelry, I am not the only person who has done this. I did teach the class once and have it on the schedule again in 2018. And I think several people have purchased yarn for this pattern but aren't taking the class, so the sample has been good for the shop. I like to think that in the long run, the hassle will be worth it because this class will be popular and recurring. We shall see.

Then I eagerly dove into a circle jacket in reversible lace. I spent a lot of time swatching to figure out the math for center-out reversible lace. I like to think I'll post that when I'm ready to post the jacket. If you took a class from me at SAFF, then you probably heard about this because I was bubbling with joy and enthusiasm and pleased with myself. I worked happily from the center out. Then I placed armholes on waste yarn and worked a couple more inches. Then I opened the holes, picked up for both sleeves, and started working sleeves two at a time. After about a dozen rounds, I decided I should have worked short-row sleeve caps. So I've needed to tink both sleeves. I am kicking myself, as if I had just tinked one round a day, I would have been done a month ago. And I am concerned that the four skeins I have won't be enough yarn, or that I will need to make some other adjustments so I have a circle jacket rather than a circle trench coat. But the yarn is gorgeous and working up beautifully (sorry, no photos, yet). When I find where I left my mojo, I'll pick it back up.

Then there has been the travel. If 2016 was the year of little travel, 2017 has been the year of lots. And this is in spite of the fact that Cuddly Hubby and I talked about a trip to Paris over the end-of-year holiday but didn't do it, as neither of us had time to plan it. The end of year went something like this:
Thanksgiving weekend
Weekend at Cincinnati Regional Gathering (great party only 8 hours away)
Weekend of major snowstorm (another tree limb across the driveway)
Weekend in Washington D.C. and Maryland (Vermeer at National Gallery = two thumbs up)
Christmas weekend
New Year's weekend

And there were other crafting distractions. I had some colored cotton on the spinning wheel. Please don't throw me out of Georgia for writing this, but I have to admit that spinning cotton is not my favorite. It took me from July to December to spin 128 yards of 2-ply cotton. I paid a whopping $1.10 for the 28 grams of cotton at the Smoky Mountain Spinnery fire sale earlier this year. So this was really more about learning and practicing. It started out like this: 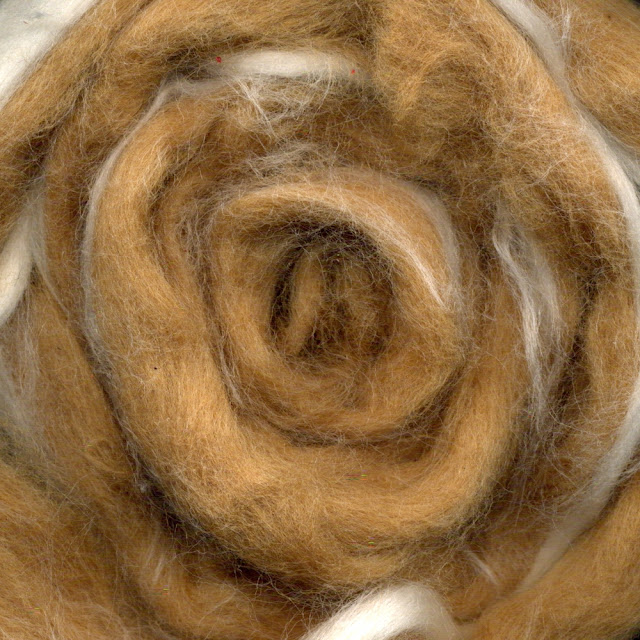 Notice the warm caramel color. When I finished the yarn, I boiled it in washing soda to deepen the color. I ended up with this: 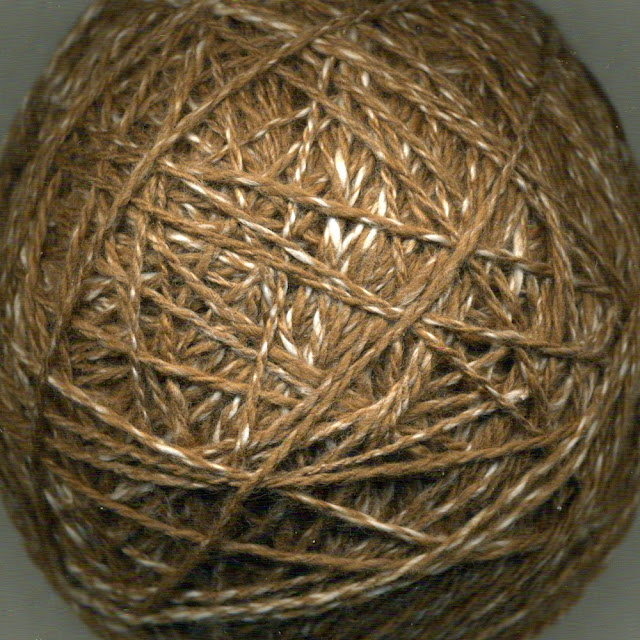 It is a little more root beer-colored. The brown darkened and the warm tones lessened. On the plus side, the spinning wheel is now free for other experiments. I did a combo spin — spinning bits of fiber from different hand-dyed braids — when I was demonstrating spinning at the Mableton Storytelling Festival in October. I haven't posted a picture of that skein yet, as I plan to finish a few more and post the group. Unlike the cotton, that was a very satisfying skein. Special thanks to Jillian Moreno for her video 12 Ways to Spin Variegated Top. I would not have had the courage to try a combo spin if I hadn't seen her beautiful results.

And for some reason, the snowy weekend inspired me to finally put a warp on my loom. Checking the receipts, I purchased the yarn in spring 2014. I had even done a sample warp to test the pattern. Again, no pictures yet, as I plan to post more about this later. Let's just say I'm doing a snowflake twill on 8 shafts. I have watched Laura Fry's essential reference The Efficient Weaver video multiple times. Thank goodness I have both taken her class and purchased the video. However, I think Laura is a warp whisperer. She'll do something in two minutes on the video that takes me fifteen or thirty. And the number of mistakes I have made is humbling. Threading errors. Sleying errors. Crossing threads. Thank goodness I had one overall rule — never surrender the cross. (For you non-weavers, that's the spot in the wound warp where threads cross each other. It prevents threads from moving out of order.) But, after much perseverance, I believe I am almost ready to weave the pattern. I think everything is threaded and sleyed correctly. I've woven a couple inches in plain weave in a thinner thread so I can fold over the hem. I even took the time to hemstitch the beginning. Now I just need to figure out from my 1000-day-old-notes which one of the five treadings I wove is the one I want to weave and exactly which treadling and tie-up that was. This is a moment when I must trust my younger self.

Then again, for some reason my younger self in a moment of optimistic ambition put "1×1 Wonders" in the proposals for South Carolina Knit Inn 2018. I have been toying with creating this new class and I have notes about what I want to teach in it. Well, it got accepted. In fact, the class is full. So I'd better have a new handout and class ready to go the first weekend of February. Towards that purpose I've knocked out a quick version of "Twisted" from Lynne Barr's marvelous Knitting New Scarves. The yarn is about half a Caron Cakes from Michael's. 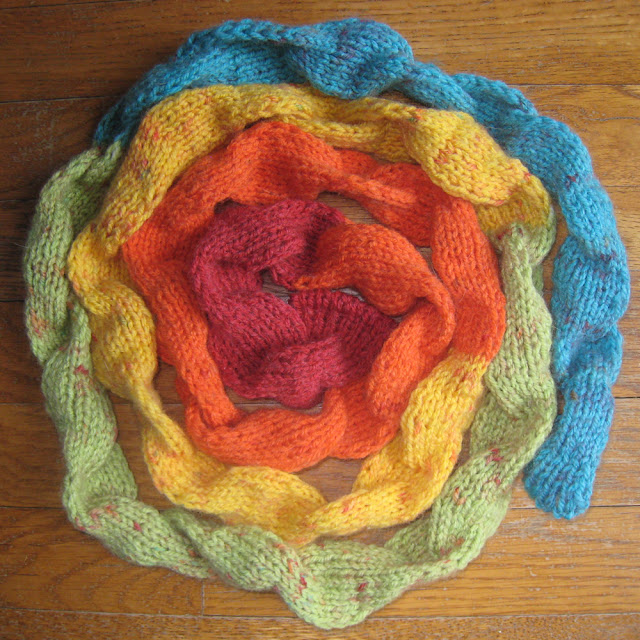 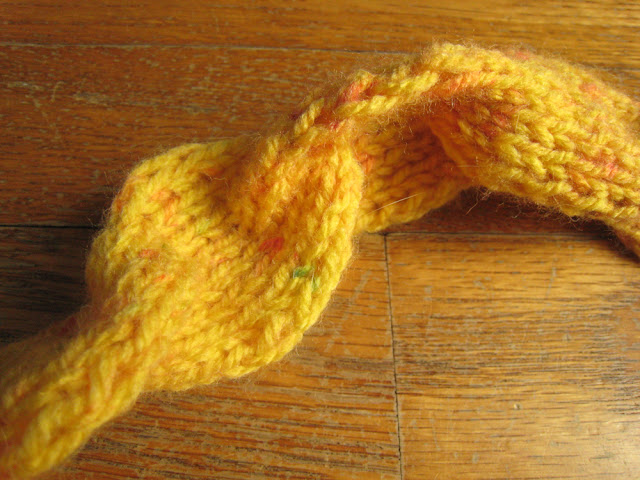 And, while the whole thing looks like stockinette, it is actually a combination of stockinette in the round and 1×1 ribbing. Since reversible lace is based on ribbing, I am trying to develop a series of related classes that would make a good unit to teach at a weekend festival. While I am a little time-crunched right now, I will be glad later that I put this class together. And South Carolina Knit Inn is my once-a-year opportunity to test drive a new class.

And, sometime this month, this blog turned 10 years old. Thank you for following me through a full decade of fiber experiments. Back when I started this blog, I hadn't done any spinning, weaving, dyeing, or felting. I wasn't even on Ravelry. Tomorrow, I will have to choose among multiple fiber crafts as I decide whether to watch college football, the Harry Potter marathon on HBO, or a backlog of curling. Wishing everyone a happy crafting start to 2018!
Posted by Jolie No comments: