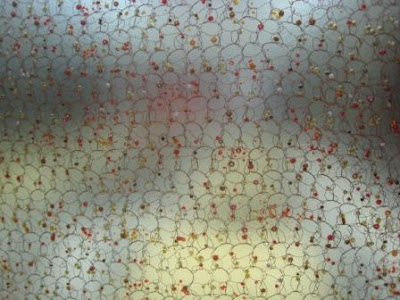 World Wide Knit in Public Day was last Saturday for most of the world. Some of us will be celebrating this Saturday, because TNNA trade show was last weekend. Most of us think of knitting in public as people sitting around and knitting in a public area. But "knitting" can also refer to the knitted object, rather than just the task. And in the Cumberland Mall food court (across the street from Cobb Galleria Centre, where STITCHES South was held) is just such an example.

At least, I think it is knitted. There are translucent dividers in the food court seating area. When you view them edge on (as at right) they appear to be beaded and loosely knitted fabric (wire?), encased in a thick layer of clear acrylic. Or they might be single crochet. I'm not sure, and the textured surface and openness of the work makes it tricky to discern.

Does this mean we could knit a shower door or a stained-glass window? The scary thing is, I don't need this idea. I have some liquid acrylic in the basement, as I used it for building a couple gelatinous cubes for my husband's Dungeons & Dragons game. I even have the tinting kit to make the clear acrylic different colors, as at the time I was thinking I might experiment with terrain miniatures such as lakes and ponds. Hmmm. Come, Igor. Off to the laboratory. 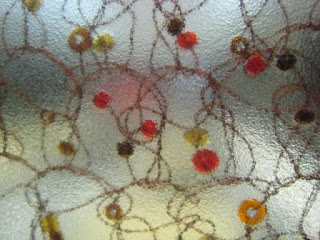 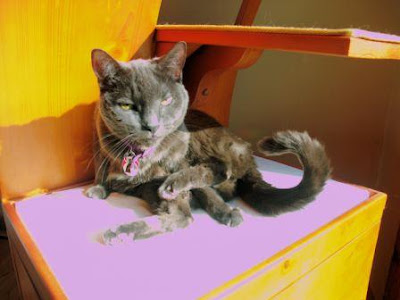 My home is now quite empty. Sophia passed away last night. Her health had gone downhill, but had accelerated since last fall. A regular veterinary check up this spring revealed that her kidney disease, which had been stable for many years, was not so anymore. So at least I knew that our time was more limited than I imagined.

Although the processing on this picture at top didn't turn out quite right, this is my favorite picture of her. She was a small cat, but she had a lot of attitude. She was very elegant and composed in the body, but her tail would always give away her emotions. We joked that she should never play poker, as the tail would be a tell. She loved to slink around silently or to sleep in the shadows. She kept her grey coat -- a low-observables coating -- immaculate. She could be the F-22 stealth cat when she wanted to be.

She had been a stray in Ann Arbor. A roommate with two cats had moved out and I wanted another cat so Copernicus wouldn't be bored by himself. When I first brought her home, she was the crazy, flipped-out cat. She hid under the bed. She didn't want anything to do with people. I think she didn't purr for the first six months in my home. But eventually she learned that she had family. In her later years, we would sit on the couch and she would show up, hop up, and sit in our laps with a certainty that now was the time to take over the laps. She had a particular skill at picking the most critical moment in my knitting to commandeer my lap.

Her attitude also showed last year. She had a stroke February 2008 while the Cuddly Hubby and I were away on a Valentine's vacation to the beach. When we got back a couple days later, she jumped a gate at the bottom of the stairs -- a gate that had been put there to keep her from going up and down stairs and potentially falling. She never cared for medical assistance and was always perfectly fine. She could be quite the kitchen mafia, showing up and fluffing herself up and insisting to taste whatever it was we had. She had an odd fondness for raw tomatoes, which I always attributed to her time on the street in Ann Arbor. And she often slept with her gold-green dragon eyes slightly parted, lest anyone sneak up on her. My own little furry, dark hearted, predatory Smaug.

So my house is quite empty now. I remember nights last year, when I would be in bed, ready to sleep. Sophia would be next to me and Copernicus would be on my pillow. I remember lying in bed and thinking how nice it was to be crowded and how I should remember it because it wouldn't last. And now it is gone. I have far too much space in my bed at night. 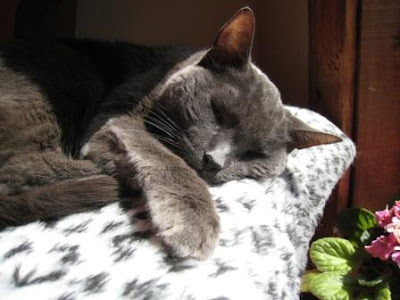