Last weekend was a much-needed happy time. For those of you wondering why the blog has been so quiet, I apparently have attracted a quantity of bad juju. Since the beginning of August I have:
And my paternal grandmother died on Monday the 8th of September.

On the positive side of the balance sheet:
And I got to teach at the third Georgia Alpaca FiberFest.

The previous two years the festival was at Callaway Gardens. This year it was at the Columbus Convention and Trade Center, which is right on the riverfront in downtown Columbus, Georgia. The facility is the old iron works founded in 1853. Wow! It is a lovely facility. The character of the facility has been preserved, but it is also modern. There is a lovely waterfall fountain that would have been a perfect place for sitting and knitting if it hadn't been so dang hot outdoors! We will anticipate better next year.

The market was particularly fine this year, doubling in size from last year. I point this out because STITCHES South has moved to Nashville for 2015. So all you Atlantans out there who aren't planning on trekking north in April, please keep Columbus in mind for next year. While there are yarn shops in Atlanta that stock spinning fiber, it isn't the embarrassment of riches that it is when it comes to yarn. I rely on the festivals for padding out my spinning stash, especially with Spinzilla looming next month. This market had yarn, plenty of spinning fiber, bags, wheels, Saori looms, felting tools, yarn bowls, African baskets, and other fiber art goodness. I purchased two art batts and won a third as a door prize. I also purchased a Saori book on how to make clothes from rectangular lengths of hand weaving. And the goodie bag included some lotion and body wash from SuriBunni Fine Fibers and a champagne chocolate truffle from Trillium Vineyard. (Somebody please remind me in the spring to go purchase a bottle of wine when their first vintage becomes available.) 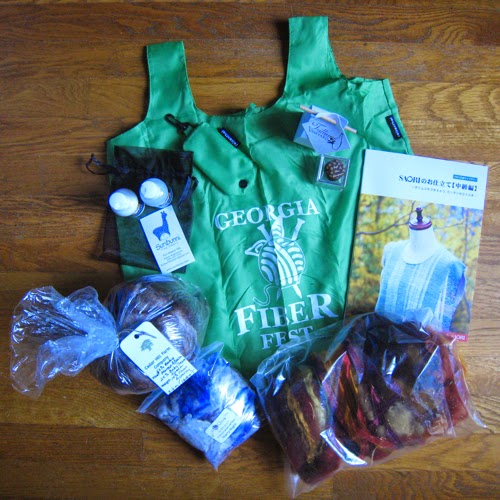 Several of the spinners from The Whole Nine Yarns attended the festival. On Monday evening, we were talking about the festival. The conversation mostly revolved around what wheels we did or didn't try. There was a huge traditional Saxony wheel that even had a distaff. It looked like something from a fairy tale, but it was so big it probably would have needed a great room. Several of my colleagues tried it out, but I did not. 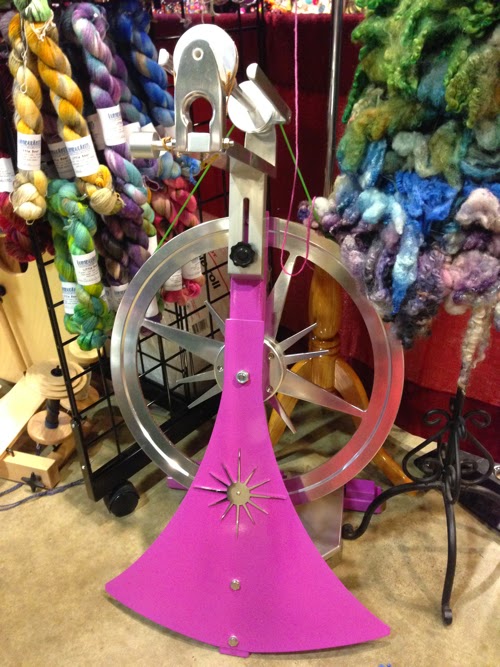 The wheel that garnered the most gossip was by National Custom Spinning Works and brought to the show by LunabudKnits. None of us had seen one like it before. My delightful roommate for the weekend, Sarah from Handmade Saori Weaving Studio in Huntsville, convinced me I needed to try this wheel. Let me just say for the record, I did not need to try this wheel. I have a lovely Majacraft Rose that was a gift from my dear Cuddly Hubby, thank you very much. But this National Custom Spinning Works wheel almost makes me sorry I have a Rose. There was much agreement within the group that this wheel treadles more smoothly and quietly than any wheel we had encountered. The bobbins are large, about double the length of a standard bobbin. The wheel with the standard flyer and three bobbins costs $995. Or for $1295 you can get the complete package which adds a jumbo flyer with a large orifice to accommodate plying or art yarn, three jumbo bobbins, and a vertical lazy kate that holds all six bobbins. For the extra $300, I think the complete package is a no-brainer. The wheel comes in ten different colors, and apparently the little blaze on it can be customized, too. If I were starting from scratch, I would seriously consider this wheel, probably in either red or plum . We all agreed that about the only drawback we could find was that because it is a metal wheel, it is probably a little too heavy to schlepp around. I will continue to recite, "I do not need to have a wheel at the Maryland Man Cave," so that I can continue to make my Will save against this modern marvel. It gives new meaning to the exclamation, "Shiny!"
Posted by Jolie 3 comments: