Today's blog post was going to be a picture of my house lit up tonight, and close-ups of the hand embroidered ornaments on my tree. The Cuddly Hubby is home for a couple weeks. I had wonderful friends visiting on Sunday. I spent most of last week cleaning and cooking, so my home is clean and my kitchen counter hosts tasty holiday treats. It was going to be a post about the loveliness of the holiday season, and how dear home is.

And then I decided to go buy some firewood and get some groceries. So while Cuddly Hubby shaved and showered, I headed off to run those two short errands. I was listening to Chanticleer on NPR as I drove through the woods and over the historic Concord Covered Bridge, a fresh cup of English rose tea in the cup holder of my car. I was feeling very festive and merry. It has been raining and misty here for three days -- uncharacteristic Georgia weather. The floor of the bridge was re-planked about a year ago, and the new planking is a slightly wider pitch than previously. That's probably good for SUVs, but not great for little gas-sipping cars like mine. I know this. I've driven this bridge a fair bit and am usually fine in positioning my car correctly. With the slick surface, the tires slipped off the raised planks, skidded inside the bridge, and this happened. 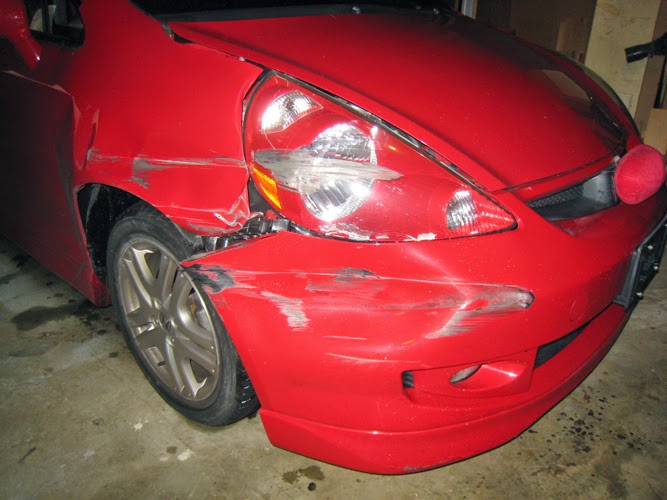 So today's blog post is not about holiday cheer and quite homes. Today's post is about how what I feel about 2014 falls into the category of Not Safe For Work. When I attended the Atlanta Knitting Guild meeting earlier this month, I kept running into knitters I respect and admired who had sad stories about losing someone special in their lives this year. I don't like seeing nasty things happening to nice people. This year had too much of that.

What I want for Yule and for 2015 is not riches and fame. I want normality. I want quiet. I just want my husband at home, sleeping in our bed. I want my cats happy and healthy and doing normal kitty things every day without a lot of intervention. I want to get up in the morning, kiss my husband, feed my cats, eat my breakfast, and make a cup of tea. I then want to get to work on whatever knitting thing I need to do -- sending proposals, updating classes, writing handouts, publishing patterns, updating this blog, or making swatches. I do not want to spend time at the veterinarian or the emergency room or patching walls or dealing with auto insurance or attending funerals. Right now it feels as if this request is like asking to win the lottery.

To my dear colleagues out there who do read this blog, I hope 2015 will be a beautiful year for you. I was thinking last night about holding a satchel of stars, and handing them out one by one to the many dear people in my life. Each one would be a lucky star, destined to bring good luck and happy events to each of you. I wish you all the very best through the holidays and the coming new year.
Posted by Jolie 1 comment: 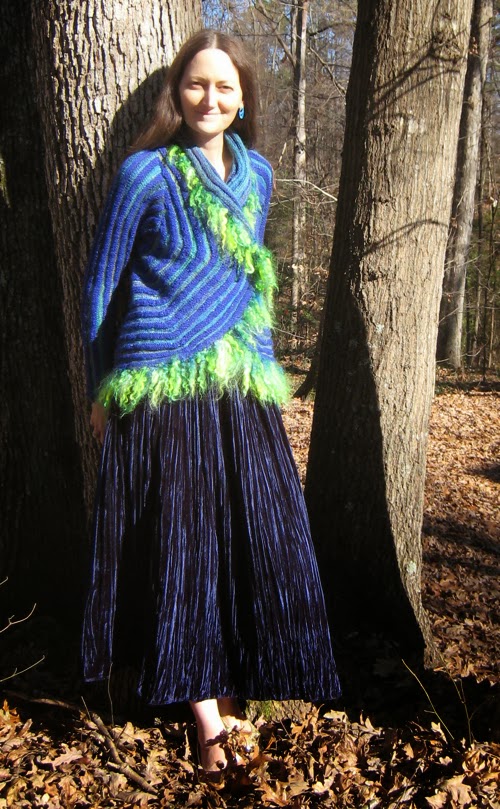 When I look at my Ravelry account, 2014 seems to be an unproductive year. Partly, I need to be better at having multiple projects on my needles. Less travel and fewer board duties would help, too. But partly this apparent lack of progress is hidden in the completed projects. The one I worked on most of the year I finished just in time for Thanksgiving. It is a swirl jacket made entirely with my own handspun.

The cobalt blue with sparkles was purchased at Uncommon Threads in York, Pennsylvania back when the shop had a different owner and was located in the downtown rather than the Queensgate Shopping Center. It was in a bargain basket in the back of the shop, tossed in a pile. I'm guessing it had been used for a class or demo. It was marked as superwash wool. While most of it was cobalt blue, some of it was a lighter blue. At the time I didn't even think to weigh it, so I can't say how much I bought. I can say there was plenty of it (12 ounces? 16 ounces?) and that I still have some. I bought the crystal metallic over at The Mannings. My recollection is that I tried to card the sparkles into the blue, with mixed results as they were different staple lengths. When I spun at the wheel, the sparkles distributed very unevenly because the wool fibers and the sparkles were not the same length. I persevered in my poor spinning technique -- I was a newbie who didn't know better -- and eventually produced a two-ply.

The multicolor is Louet Northern Lights 100% wool top in color 28 violets. The top comes dyed in short blips of color, similar to hand-painted sock yarn. On their website, Louet sells Northern Lights in half-pound bags (8 ounces); but The Mannings usually divides theirs into 4 ounce bumps. I purchased 8 ounces that I'm sure were from the same dye lot. This was also spun up a a 2-ply.

Thus, all the body yarn was purchased as colored fluff and spun. The locks were purchased raw this year at Maryland Sheep and Wool. I've already blogged about how I dyed the locks in a disposable turkey roasting pan and tailspun the yarn.

I taught the Swirl Jacket this summer as a knit-along class that met three times. The idea was we'd make our jackets during the summer and finish them just as the weather cooled. I get a lot of use out of my previous swirl based on the Plum Perfect pattern. Since that was an off-centered circle, I decided to try the off-centered oval. I chose the Coat of Many Colors. Now wearing the finished garment, I think the circle is more flattering on me than the oval. Because I was working with handspun yarn and was wary of yarn shortages, I skipped the first two welts of the pattern. This also made for a narrower collar, which I think is in better proportion to my body size. I was somewhere in the sleeve increases and traveling on the West Coast when I ran out of the blue yarn. But I had more raw materials in my stash, so I merely had to wait until I got back home to make more. And then I ran out of the multicolor. The Mannings did have some Northern Lights violets in stock, so I ordered it. Don't look too closely, as it is pretty obvious this is a different dye lot. Furthermore, some elements of my spinning have changed in the four or five years since I first made these yarns. The extras are not quite as close a match as I would have liked. But, better to make more and saunter onward than to rip out a pound of handspun yarn that has been cut up into separate pieces every time you've changed welts. 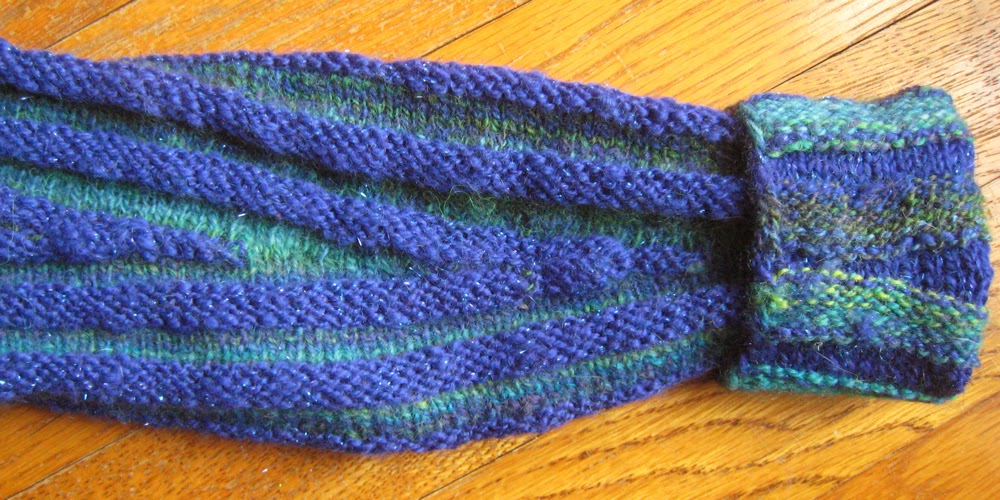 One change I made that I liked is I added one more welt immediately before the neck bind-off. I did this so that the welts would line up in the sleeves, something that is especially noticeable if you are working alternate colors. I also grafted the sleeves together, so as to make the garment almost reversible. The grafting was a little tricky, since the garment was shaped at the same time by adding or subtracting stitches at the end of the rows. I'm not completely happy with the grafting, but I like it better than if I hadn't done it. It also added extra time to the garment, since I would knit a welt, cut the yarn, rip the welt back, and then graft it together as I knit on the second go-round. This only needed to be done on the decreasing half of the sleeves, but it still meant I knit the sleeves one-and-a-half times rather than just once. 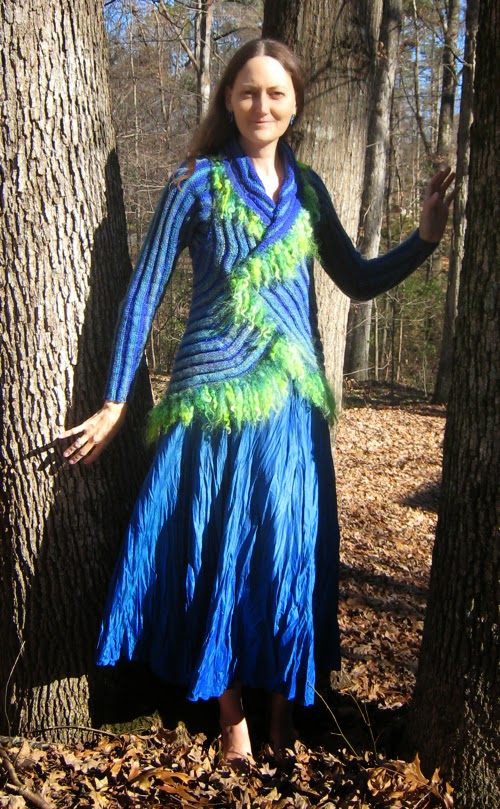 There are some elements which don't entirely delight me about the finished garment. Rather than knit with the tailspun yarn, I folded that yarn in half and wove it in on about the third row of the garment while I knit with the blue yarn. The rows of locks pulls in just a little more than the rest of the knitted fabric. On the other hand, perhaps the garment would drape too much without it?

I also changed the pattern stitch a bit because I was working in two colors. Normally, this would be purl 5 rounds for the blue and knit 5 rounds for the multicolor. Instead, I knit the first round of the blue. This causes all the purl blips to fall to the multicolored side of the fabric. This is why the fabric is two-sided rather than reversible. Both sides are good, but they are not identical.

The garment is also a little more bold and graphic than I had intended. I was shooting for a statement jacket. Perhaps this speaks too loudly?
Posted by Jolie 1 comment: