Our house in autumn

I have two pictures for this post. And I must say, autumn has been lovely this year in the ATL. We had surprisingly colorful autumn last year too, surprising because the drought had many people thinking that the leaves would go straight to brown. Anyway, the first picture was taken on Election Day, 4 November 2008. 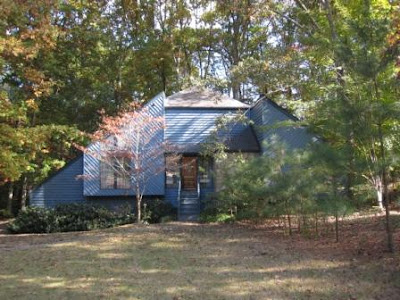 As you can see, the dogwood by the front steps has color, but the oaks out back are still very green.

The second picture was taken not quite a fortnight later, on the 16th of November. 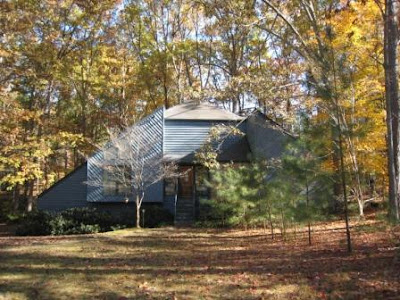 At this point the dogwood is empty, but the oaks out back had begun to turn, and there is a tree on the right that is a lovely golden color that looks particularly good with the blue-grey of the house.

So there it is, we have my house in all four seasons. Proof that we do have seasons in Georgia.
Posted by Jolie No comments: 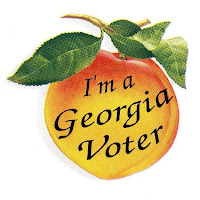 I cannot stress enough what a fabulously gorgeous fall day it is here in the Metro Atlanta area. We have some beautiful autumn color and the temperatures are in the low 60s this morning. I just voted at my poll, Mableton 03 at Thompson Park. I rode my bicycle over and back, as I anticipated parking might be tight. I got to my polling place about 9:30 AM and was done voting about 9:45 AM. The poll was set up to double-check voters at the door. One poll worker would ask if you had voted here before. If yes, off you went to the check-in line. If not, there was a station where another poll worker could check to make sure you were in the right place. There was a short wait between receiving the voter access card and getting to a voting machine. I'd say that Mableton 03 could have stood to have maybe one or two more machines, but I already know that every voting machine owned by Cobb County is in use today. Early voting here was about 35% from what I understand. All in all, a very smooth process.

Now I gotta go add my "I voted" sticker to my bumper sticker.
Posted by Jolie No comments:

Just a reminder that tomorrow is Election Day. I'll be at my usual post working election returns for Cobb County. Yes, I do expect to be home after midnight, but I'm planning on taking a nap tomorrow afternoon and sleeping in on Wednesday morning.

I just wanted to remind people that I know the waiting in line and all will be a pain. I don't have to remind ya'all to vote, 'cause you know that already. But do remember that, in Cobb County at least, the poll workers work the whole dang day. That means they are there at 6 AM to set everything up so the poll will open at 7 AM. They are there the whole day -- they are not permitted to leave the polling place. Everyone who is in line at 7 PM gets to vote. After everyone has voted, then the poll needs to be closed down, evidence printed and recorded, results transmitted, and items returned to the county election office. For some polls, it will be another two hours or more from when the last ballot is cast to when the poll managers can finally head for home and well-earned rest or a good drink. So please be extra special nice to the people working your poll, especially if you are voting late in the day. Their hard work makes the democracy possible.
Posted by Jolie No comments: