I try not to spend too much time on this blog advertising where I'm teaching and what I'm doing. After all, I figure most of you are here to see the knitting and maybe pick up a technique tip. I don't want to whack you with advertising.

Some of you may have noticed the STITCHES South button that was in the upper right corner of my blog for the last couple weeks. It's gone now, because my class didn't make. First off, I want to say how sorry I am to the two people who did sign up. The material I was planning on covering -- on double-knitting texture patterns and double-knitting words -- can be found but is rather obscure. This was a really advanced class of the type that I don't teach at the local shop because there aren't enough advanced knitters. But it is also a beautiful technique. I've made several projects with textured double-knit borders and been very happy with the results. And being able to double-knit words is perfect for personalizing a baby blanket or including a college logo on a scarf. I really appreciate that XRX was willing to take a chance on it, because the only way to know if knitters are willing to sign up for a class in which already being able to double knit is a prerequisite is to put such a class on the schedule and see what happens.

This is also a good reminder to me that one of my goals this year should be to produce something utterly awesome in double knitting that you can't make if you don't know the advanced techniques. So often it is the siren song of a gorgeous project that drives us to learn a particular technique.

I did want to mention that I am on the schedule at two other shows this year -- Knitters Connection in Columbus, Ohio on 15-17 June and Georgia Alpaca FiberFest at Callaway Gardens 14-16 September. Neither of these sites is quite ready for registration yet, but I'll try to remember to put links where you can find them when registration opens.
Posted by Jolie 1 comment:

The March 2012 The Knitting Guild Association e-newsletter just came out. I had a nice e-mail exchange earlier this year with Debby Johnston as we were updating the information for North Georgia Knitting Guild. TKGA helps to connect knitters and guilds across the country. The guild resources had a page of program ideas, so I mentioned how delightful our night of knitting disasters program had been last July. I think it is helpful for newer knitters to see that even the people who show up each month with a new shawl or sweater have had projects that just went totally wrong.

Well, when I sent Debby a copy of our newsletter (with pictures), it never occurred to me that she might use the one of me wearing the Baa'ad Bag as a hat. So, now that the picture is out and about in the world, I thought it only fair to show the Baa'ad Bag in all its multicolored mischief. Please remember I am not responsible for computer monitors kvetching. 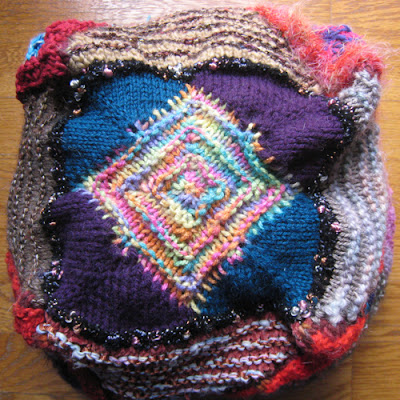 I started by casting on for a centered motif on the bottom of the bag. I knit a square in the round. Then I knit a triangle on each side, which doubled the area of the square. 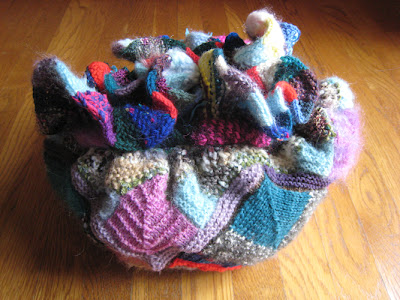 I kept adding on triangles and squares. Sometimes I made the work wider. Sometimes I was just trying to make it taller. 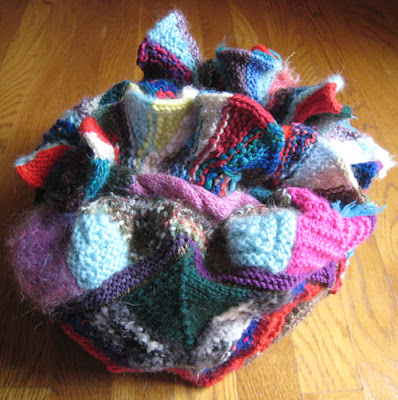 Near the top I worked a section side to side and then joined it together to create a tube for the drawstring. I still cannot quite figure out what I did. That's frustrating! You can see part of this welt in the picture above -- it is the twisty cable-like pink horizontal element. I love how it looks like a horizontal cable! 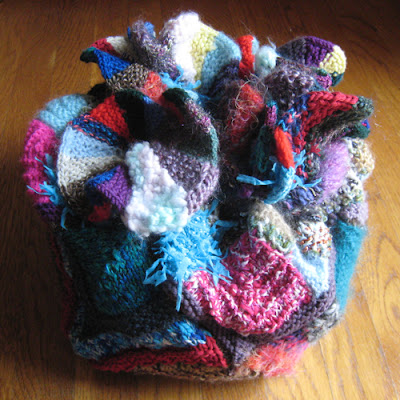 At the end, I decided to add a flouncy ruffle around the top. Each little triangle represents one live stitch that is connected by a short-row ruffle.

I have a lot of respect for people who can just add-on and make things up as they go. I usually spend time creating an overall design and plan. If I ever try this sort of thing again, I like to think I know better now.
Posted by Jolie No comments:

For the SEFAA Square Foot Fiber Pin-Up Show, I knit up an entrelac square. The rules for the show were simply that the entry should be 12" square in a fiber art. It was a wonderful opportunity to play around. After all, a single square foot is hardly too much effort in either time or materials. And it was a great opportunity to play around and try something new.
In this case, I already knew how to do entrelac. After all, I took a class with Gwen Bortner, the Queen of Entrelac herself. But this was a chance for me to try out the techniques I learned from Jay Petersen. Jay writes the Fuzzy Logic blog that has been in my blog links for quite some time. You'll recall that I met Jay in person last summer in Portland, Oregon. Jay and I both share an interest in reversible (both sides the same) and double-faced (both sides good but different) knit fabrics. Jay spent a great deal of time exploring entrelac construction. He was interested in making entrelac that looks good from both sides. Regular entrelac technique has a clear right and wrong side. Jay was able to adapt Rick Mondragon's modular intarsia loop technique to instead join entrelac modules. Because he bypassed the usual method of working two stitches together, Jay's technique results in flatter joins as well as a fabric that is pretty good from either side.

The yarn for my block came from the 2011 Knit In at The Mannings. I won a skein of discontinued Noro Aurora yarn for being the knitter who came the farthest to the party. This is an interesting yarn, as it is Noro but with a sparkly yarn plied along. Every now and then the metallic yarn is bunched up in the twist, so that it almost looks like a bead on the yarn. Since I only had one skein, I wasn't quite sure what to do with it until the pin-up show came along.
I was trying to knit a sort of faux plaid. I wasn't entirely successful, but it was an interesting experiment. I also used my scale to plan carefully. In the end, I had only a couple feet of yarn leftover. And while the block was less than a foot when it came off the needles, it dressed out to the correct size quite easily with water and blocking wires.

For those of you in the area, the show is at the SEFAA Center, 1705 Commerce Dr. NW, Atlanta GA 30318. It will be on view for the remainder of March. The center is open on Tuesdays from 10 AM to 2 PM, on Wednesdays from 5 to 8 PM, and on Sundays this month from 2 to 4 PM (except 11 March, when the center will be closed). There are about 40 squares in a wide variety of techniques. If you are looking for inspiration, it is well worth taking some time to check it out. There is also hope that this will be an annual event. So, if you have an idea for a square-foot fiber experiment, be sure to make it happen in time for next year!
Posted by Jolie No comments: