On the Alacrity mitts, I knit myself into a spot a didn't expect. I cast-on. I worked in the round. I introduced the thumb gusset using a bridge. I decreased away most of the thumb gusset. And then I got to the bottom of the gusset and realized I needed to work a reversible 5 into 1 decrease to keep everything in pattern.


Yes, this is a reversible centered quadruple decrease.

Not fast, but it can be done.
Posted by Jolie No comments:

As I continue to explore reversible lace, there are more and more techniques to develop. I've already posted how to work left-leaning and right-leaning decreases. The obvious corollary is how to work double decreases.

In a centered double-decrease, there are also two possible configurations.
The stitches start out on the needle as left - center - right.

The purl-wise version of this is:

The center ∙ left ∙ right version normally requires a lot of slipping stitches back and forth. However, when used in a reversible decrease, there is a shortcut.

When slipping knit stitches on to the cable needle, be sure the left and center stitches have eastern/right facings, then:


The purl-wise centered double decreases can mimic either stack. As I worked them in the video, they created identical reversibility with their knit-wise mates. If I had matched them up the other way, they would have created mirrored reversibility. The reality is this detail is so subtle it probably doesn't matter. I suggest figuring out which knit-wise version you like, which purl-wise version you like, and then work those unless you have a really good reason to do differently.
Posted by Jolie No comments:

I gave the direction to use a bridge to create a thumb gusset. As this is an unusual maneuver, I thought I should explain.


In a top-down mitt, you cast-on in the round and work a tube. At some point, you may want to create a thumb gusset without breaking the yarn. You can do that by casting on more stitches, joining them back to the main tube, then continuing in the round. For reversible lace, I use a waste yarn tab to mimic the tubular cast-on and bind-off I've used elsewhere in the project.
At that point, I can return to working in the round. Eventually, I introduce decreases to shape the thumb gusset away.

If you prefer a taller thumb, that is still possible but you'll need to break the yarn. Before you cast on for the mitt, cast-on and work a little tube for the thumb and cut the yarn, leaving enough tail to weave it. When you are ready to insert the thumb gusset, just work across the little thumb tube, join back to the body of the mitt, and continue in the round.
Posted by Jolie No comments:

Tubular Cast-On in the Round

I've already stated that for reversible lace, I like the tubular Italian cast-on. I have discovered, however, that it is not the easiest cast-on to work in the round. It is very easy to introduce an unintentional twist! Could there be an easier way?


This alternative is not as fast and requires waste yarn. However, I think it is easier to work. And it creates the same tubular structure as Italian cast-on.

Labels: reversible lace, tubular cast-on in the round, video tutorial 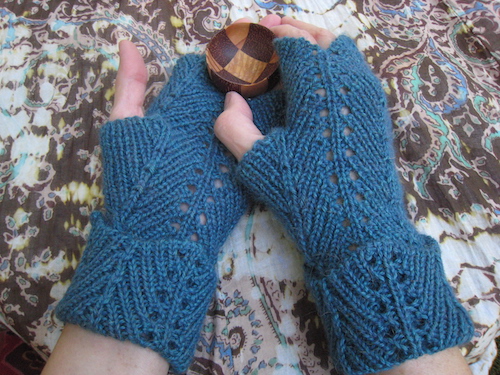 The Whole Nine Yarns hosts an annual Christmas in July event. This year's event will be this Sunday, 24 July 2016, starting at noon.

My contribution this year is a reversible lace pattern I've named Alacrity. These are fingerless mitts worked from the top down. If you know how to work two tubes simultaneously, you can work these until you run out of yarn. This is a yummy luxury yarn you won't want to waste — The Fibre Company Road to China Light, containing alpaca, silk, camel, and cashmere. I had less than a yard leftover.

This pattern will also help you work your way up the reversible lace learning curve. It uses double increases and centered double decreases. The mitts are identical, so there aren't any weird directions about making a left-hand versus making a right-hand. And they are reversible, which means you can even turn them inside-out!

The freebie version of the pattern is somewhat abbreviated. I'll post the full version on Ravelry as a paid download. Video tutorials to follow here on the blog and on my YouTube channel.
Posted by Jolie No comments:

A few months ago, a member of Atlanta Knitting Guild arrived at a meeting with a challenge. She was making a blanket in pieces and was ready to seam it together. She had used slipped-stitch selvedges and was discovering that mattress stitch did not appear to be a pleasing solution. There was quite a bit of discussion amongst members but no sure-fire solution.

I let this question mull in my mind for awhile. Then I remembered a trick I had seen Gayle Roehm use in her "Sssinuous" scarf pattern, Knitter's Magazine #117, Winter 2014. As you might guess from the name, Gayle's scarf twists around and back on itself. Because it is a scarf, a tidy slipped-stitch edge is appealing. After all, most of the selvedge is visible in the finished accessory. But there are places where the scarf needs to be seamed together. And the scarf will be seen on both sides, so reversibility is highly desirable. I am pleased to report that Gayle has thought this problem through and solved it!


In this video, Gayle show how to graft live stitches to the slipped-stitch selvedge.


And in this second video, Gayle shows how to pick up stitches. (A big thank-you to Gayle for posting these tutorials on YouTube where everyone can find them!)

Some of you may already have figured out how this will figure into a seam. Use Gayle's technique for picking up right down the middle of the slipped-stitch chain. 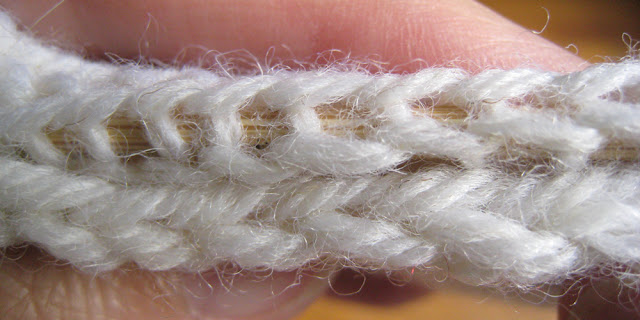 In the photo, the top shows the selvedge with a wooden double-pointed needle inserted. The bottom is the chain selvedge before picking up. 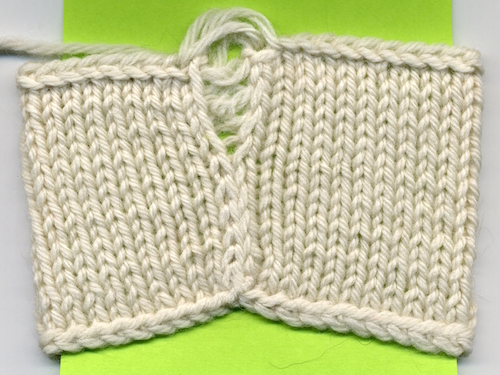 Then work mattress stitch using those picked-up loops. I've inserted bright paper behind the seam to make the loops more obvious. You can see I've basically just laced the two sides together.

While this does not produce the same inconspicuous seam as mattress stitch, it does produce a seam that is tidy. (I've turned the photographs 90° because they fit better on the page when horizontal.) The top image shows the seam from the knit side. The bottom image shows it from the purl side. The slipped stitches mean you have one stitch for every two rows, which is why the result is not the invisible seam mattress stitch can achieve. Still, not a bad solution. And I must admit, I rather like it from the purl side.
Posted by Jolie 1 comment:

As you know, sometimes I'm working on a project that suits a vision, and sometimes I'm just experimenting to see what happens. ("Experiment" — isn't that just a grown-up word for "play?")

Four ounces of Corriedale recently hit my fiber stash. This was from A Good Yarn in Sarasota, Florida. I had been a winner in last year's Spinzilla, but somehow we had never quite coordinated getting the prize into my mailbox. No worries, as it arrived just in time for the summer dyeing season. Yes, while the rest of Atlanta melts in the heat, I figure I should make use of this free and excess heat energy. 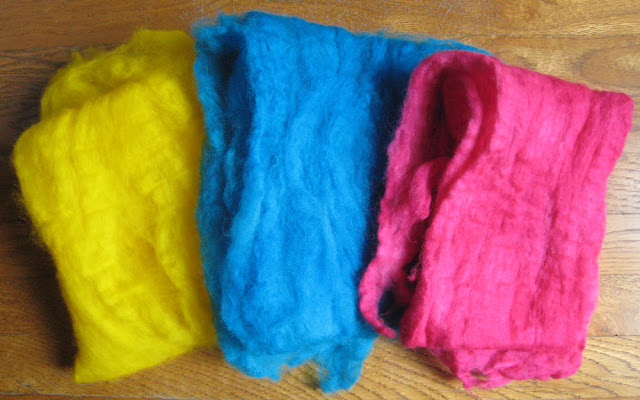 I divided the fiber into thirds. Using Jaquard acid dyes, I dyed one chunk with 602 bright yellow, the second chunk with 608 pink, and the third chunk with 624 turquoise. I did the sun tea version of dyeing, but I should have used larger jars. I had trouble with the fiber not dyeing evenly. I got the yellow saturated in only one or two tries, but the pink and turquoise I dyed repeatedly. I must admit I was amazed at how the fiber slurped up the pink. I continue to find that blues don't always exhaust the dye bath. Maybe they need more vinegar?

The downside of the repeated dyeing was that the turquoise felted a little but the pink felted a lot. Hmmm. I used my hand cards to break the fiber up into tufts. 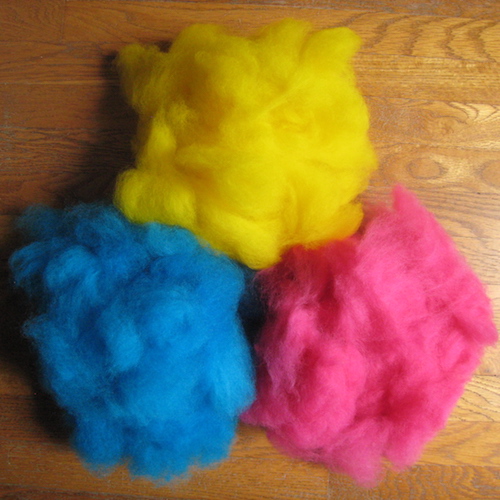 Okay, so what to do with three piles of fluff?

By now you may have guessed that what I have are the basic printer colors of yellow, magenta, and cyan. I knew I wanted to blend the colors. But how?

Initially, I thought I would make rolags on my blending board. But when I started to use the board, I realized I needed something with a greater capacity. Time to get out the Majacraft Fusion Engine drum carder!

There was some math involved and a lot of dividing. Here's what I did.

I decided to be very picky about measuring, so I used my jeweler's scale, because it measures to the 0.1 of a gram. Unfortunately, the fluffy fiber made it hard to read the scale. So I figured out what to do. I rolled up a piece of paper. I could stuff the fiber down inside the paper (or even set the fiber on top) and still be able to read the scale to get a measurement. The trick is to tare the scale first with the piece of paper on it.

I started by dividing each of the three colors in quarters. That gave me 12 puffs of fiber, 4 puffs of each of 3 colors. I decided to make 6 rolags, 2 each of 3 different colorways. My final goal was rolags blending from magenta to yellow, yellow to cyan, and cyan to magenta. That meant each rolag would use only 2 of the 3 colors.

To blend on the drum carder, I started with 2 puffs of 2 different colors.
I measured out a 1 gram puff, another 1 gram puff, and a 2 gram puff from both colors.
I put a 1 gram puff of different colors at each edge of the drum carder and carded those.
Then I did the same thing, this time moving the puffs about and inch or two in from the edge of the carder.
I took the pair of 2 gram puffs, attenuated them together, and then carded them onto the middle of the drum.

When the carding was complete, I used two aluminum US size 8/5mm knitting needles to roll the batt off as if it were a large rolag. Here's was I got. 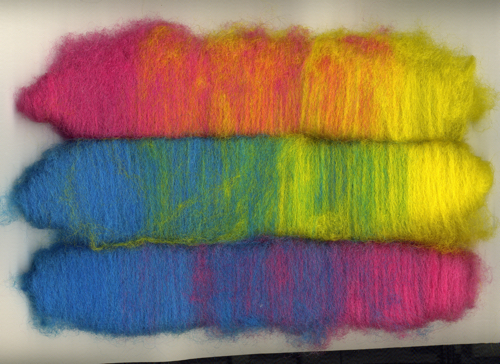 Any orange, green, or violet you think you see is an illusion caused by optical mixing.

Today is the first day of Tour de Fleece 2016. While I am not formally participating in it, I do have my fingers in some spinning projects right now.


To kick off the occasion, I decide to post this video from July of 2014. These are Leicester longwool locks from Rivendell Farm in Lancaster county, Pennsylvania. These raw locks came from a ram. As you can see, Brûlée likes the male smell. He rolls around in the locks so as to get the smell on himself. I've seen this scent anointing behavior in other animals, such as my favorite pandas at ZooAtlanta.

As a spinner, knitter, crocheter, and weaver, haven't we all had a moment when we wanted to just roll in the stash?
Posted by Jolie No comments: