While the holiday season can sometimes become an over-hyped Ferengi carnival of "buy, buy, buy," there are also plenty of people who remind us to enjoy the simple pleasures in life. Conversation with people you care about. Good food -- especially the food items you can only get during the holidays. Sipping hot chocolate, ideally while watching the snow fall and knowing you have no place else to be anytime soon. The laughter of playing games. Making something beautiful carefully with your own hands.

Happy pets make a happy home. (A happy Cuddly Hubby is key, too.)


And just because it seems appropriate: 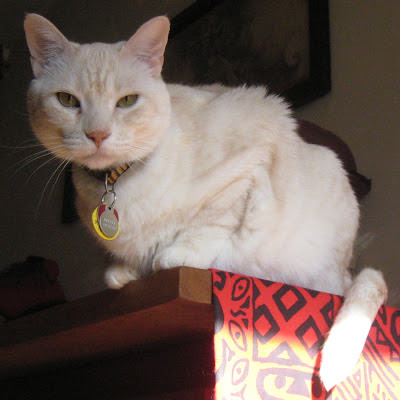 Brûlée, the criminal mastermind, in full-up gargoyle mode. Copernicus would be proud of the lording. Sophia would approve of the disdain. (Red and black fabric from Ghana circa 1977.) 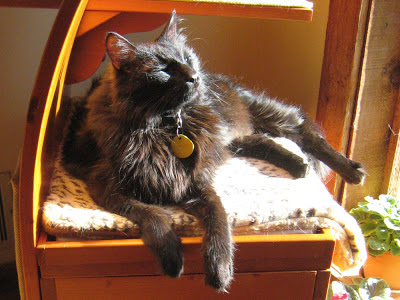 Vincent enjoying life. Some days it really is this simple -- when life gives you sunshine, sit and soak it up!

And as tonight is the darkest night of the year (solstice is at 6:12 AM EST tomorrow morning), it is good to remember that the light does return. May you always find the light, and may your own light always be a beacon to others, especially those you love.
Posted by Jolie No comments:

I usually like to incorporate some sort of selvedge treatment on any edge that isn't hidden in a seam allowance. Some knitting stitches will curl or they are loose or they just don't play well at the edges. For the Albedo Shawl, I used a 2-stitch i-cord that was knit as you work rather than applied at the end. But because I was using lace patterns, I did encounter some concerns about row gauge.

Most knitters worry very little about row gauge. After all, most of the time we are concerned with how wide our work will be. How tall or short it becomes is pretty easy to control in most projects by just knitting more or fewer rows. But if you are combining different stitches across the same row, then row gauge can be an issue. If you have a stitch pattern that is short in the same row with a stitch pattern that is tall, then your fabric will not want to lie flat and will be prone to puckering. This can be a fascinating textural design element, but it can also just be a frumpy mess!

My concern in this circumstance is that the i-cord would be too short. So I added a yarn over in between the two i-cord knit stitches. Every row I dropped the yarn over and replaced it with a new one, but I never worked it. So I never turned it into a stitch. Its sole purpose was to put extra yarn in the i-cord so that those stitches would grow to the same height as the lace stitches.

The downside is that these stitches are a little long and gangly. If you don't like the look, you could instead work two rounds of i-cord at the edges. That would give you more rows, which means the height of the stitches could be less. Either way, be sure your row gauges are compatible!

My design process is such that I sometimes come up with what I want visually before I figure out whether or not it can be knit. In the Albedo Shawl, I decided I wanted a horizontal line that would divide the border pattern at each end from the swath of plaited basket stitch in the center. What I came up with is casting off-on.

The principle is that binding off will create a horizontal line of chain stitch. Of course, if you bind off, then you don't have any live stitches on the needle. So one way to accomplish my goal would be to bind off and then knit up new stitches to replace the ones I just eliminated. But why eliminate them if you know you want them right back? So I decided to cast them back on as I bound them off. In this way, I avoided the hassle of knitting up stitches.

As you'll see in the videos, the technique is a little fiddly. You need to slip stitches back and forth between left needle and right needle in order to have them in the correct location for binding off. Basically, cast on a new stitch by making a yarn over.
Work the stitch to be bound off in pattern.
Slip that stitch from the right needle to the left needle.
Cast on another new stitch with a yarn over.
Slip the first stitch on the left needle back over to the right needle.
Work the stitch on the left needle in pattern.
Pass one stitch over another (bind off one) on the right needle.
You'll continue slipping a stitch back and forth between needles so as to place yarn overs on the right needle and out of the way of the binding off.
At the end of the row there will be one spare stitch that didn't get bound off. At the earliest opportunity, eliminate that stitch by working it together with a stitch in the selvedge.


On the wrong side, I worked the casting off-on in pattern with the plaited basket stitch. I crossed each pair of stitches first, then I bound them off-on. Again, it is fiddly. But on the other hand, you only have to manage it for one row. 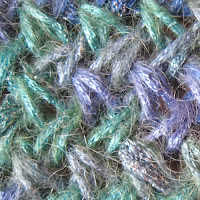 The plaited basket stitch involves crossing stitches -- i.e. cabling 1 over 1 -- on both the right side and wrong side rows. You are not going to want to use a cable needle for this. But you will find that working this on the needles is not as hard as you might expect. It does require some flexibility in the wrists. On the plus side, once you learn how to work this, you should be able to easily pick up on how to work a Norwegian purl. And while the videos show you how to work it for this particular stitch pattern, you should be able to adapt this information to other situations that call for crossing a single stitch over another.

1st video: How to work plaited basket stitch from the right side.

2nd video: How to work plaited basket stitch from the wrong side. 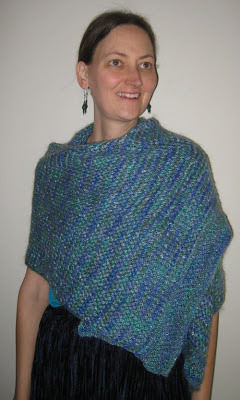 A new pattern! And a bonus chance to win yarn! Glee!

Back in June I posted about some swatches I had knitted for the summer TNNA show. One of the swatches was done in Crystal Palace Moonshine, a lovely yarn with color, shimmer, and just a little halo. In late August, I got an e-mail asking if I would be willing to make a project using this yarn. I had hoped to get it cast on during Dragon*Con, but that just didn't happen. I even tried to work on it some during the convention, but the muses refused to help me. (I'm sure they were just too busy inspiring all the serious Cosplayers.) But I did get the project worked out and cast on in September. And in about a month, I knit up this lovely shawl.

The name? Albedo is the reflectivity of a surface. Astronomers use the albedo of a planet, moon, or asteroid to make guesses about its composition. A shiny, icy surface is much more reflective than an ashen or rocky surface. Since the Moonshine yarn is glimmers and shines, it seemed like a good fit.

I like to think this would be a great accessory for a black tie occasion, such as a prom or a wedding. But it would also be nice for cocktail parties, New Year's Eve parties, or fancy outings to attend Broadway plays or opera performances. The yarn has a little swing and bounce, which I think gives the whole project a slightly sexy, sassy quality. 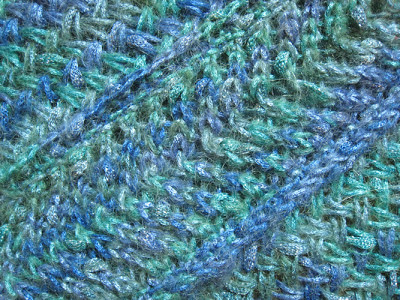 Of course, I've also tried to give the project some interest in the knitting. There is a little bit of linen stitch and i-cord at the selvedges to make the edges lie flat. I've used some lace trellis running both right and left to make the chevrons at each end. The plaited basket stitch in the middle incorporates an interesting maneuver. And, of course, I ended up making something up when I decided I wanted a horizontal line to separate the plaited basket stitch middle from the border patterns at each end. As always, there are videos (posting over the next three days) to walk you through anything in the pattern that isn't common procedure.

Bonus! I have enough yarn to make another shawl. The pattern is now for sale as a Ravelry download for $3.00. You can follow this link. On the first day of the new year, I will randomly pick a name from those who have purchased the pattern on Ravelry during these last four weeks of 2012. If you win, I will send you a private message on Ravelry asking for your postal information so I can ship a padded envelope full of yarn to you. If you would like to win 5 skeins of Moonshine so you can knit yourself a sexy shimmery shawl, you know what to do!
Posted by Jolie No comments: