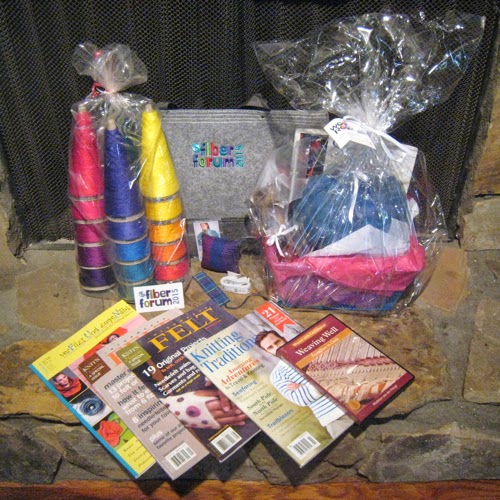 The weekend at Southeast Fiber Forum was a wonderful experience!

I drove up on Thursday afternoon. It was overcast and/or raining during the entire drive. Fortunately, about an hour of the four-hour drive was through Great Smoky Mountains National Park. Plants were just waking up from their winter slumber and turning green. The creeks were running fast and high and small feeder streams formed little veil waterfalls as they flowed down the rocks on the mountainsides. I had only driven through the park once before, and that was more than twenty years ago and in the autumn. Although it would be a long day trip, I must remember it would be a great location for a photo shoot, especially on an overcast weekend when the park wouldn't be crowded.

Fiber Forum was at Arrowmont School of Arts and Crafts, which is on the main street in Gatlinburg, Tennessee. I had not been to Gatlinburg before. It is a quintessential American tourist trap -- lots of  things to see and a main street of bright buildings in interesting architectural styles. I mention this because finding Arrowmont in all this visual overload is a trick itself. I drove slowly down the main street, guided by my global positioning system device. When it announced, "You have arrived," I still did not see the school. Then I drove just a little farther and there, on the right, was a gap between two buildings. There was a medium-sized sign at a space a little wider than an alley. I turned and headed back. Basically, you turn unexpectedly, go back through Diagon Ally, and there is Hogwarts, hidden behind the main street kitsch.

I quickly understood why Arrowmont has become such a good location for this conference. As a teacher, my bedroom was in the staff house, where the hallway has rooms on one side of the corridor and shared bathrooms on the other side. It is basically a dormitory nicely disguised as a house. Downstairs was the dining hall. It was really nice to have breakfast, lunch, and dinner served in a shared space every day. I sat with many different people over the course of the weekend, thus having the opportunity to make friends with attendees who were not in my class. The classroom studio spaces were roomy and well-lit. Arrowmont regularly has fiber classes, so they have floor looms available. The Fiber Forum classes were mostly weaving- and spinning-centric, although there was some felting, design, and even my one knitting class. There was also a small vendor hall. By the end of the weekend, I had heard about the "Kim Wall Challenge," which was to buy at least a little something from every vendor. After all, most of the vendors in our industry are small, family-operated ventures. It is nice to be supportive of them. I was not able to complete Kim's challenge. I did, however, purchase the 20-color Lunatic Fringe weaving pack and several magazines about felting. Evening activities during the course of the conference included a keynote address on the topic of design, a fashion show, a studio stroll, and a raffle. The "Learn to Spin" basket in the upper right of the photograph is something I won in the raffle -- thank you to The Wool Room in Hendersonville, North Carolina. I must remember to check them out in October when I travel to Southeastern Animal Fiber Fair.

On Sunday afternoon after the conference, I visited the Smoky Mountain Spinnery. It is a lovely store with a nice range of items covering knitting, spinning, and weaving. There is a large bookcase of wool roving in a full palette of colors -- perfect for felting or for blending colors in spinning. The spinnery also has Majacraft items in stock, which is very handy for me with my Majacraft wheel. The shop was within walking distance of Arrowmont. It was funny on Sunday afternoon after the conference, as many attendees rightfully dropped in before leaving town. Smoky Mountain Spinnery is definitely worth the stop. I did purchase the latest issue of Knitting Traditions magazine as well as a video full of weaving tips.

Overall, it was a good weekend. Fiber Forum is typically held every-other year. I am thinking I will want to attend again in 2017, whether as a teacher or as a student.
Posted by Jolie No comments: 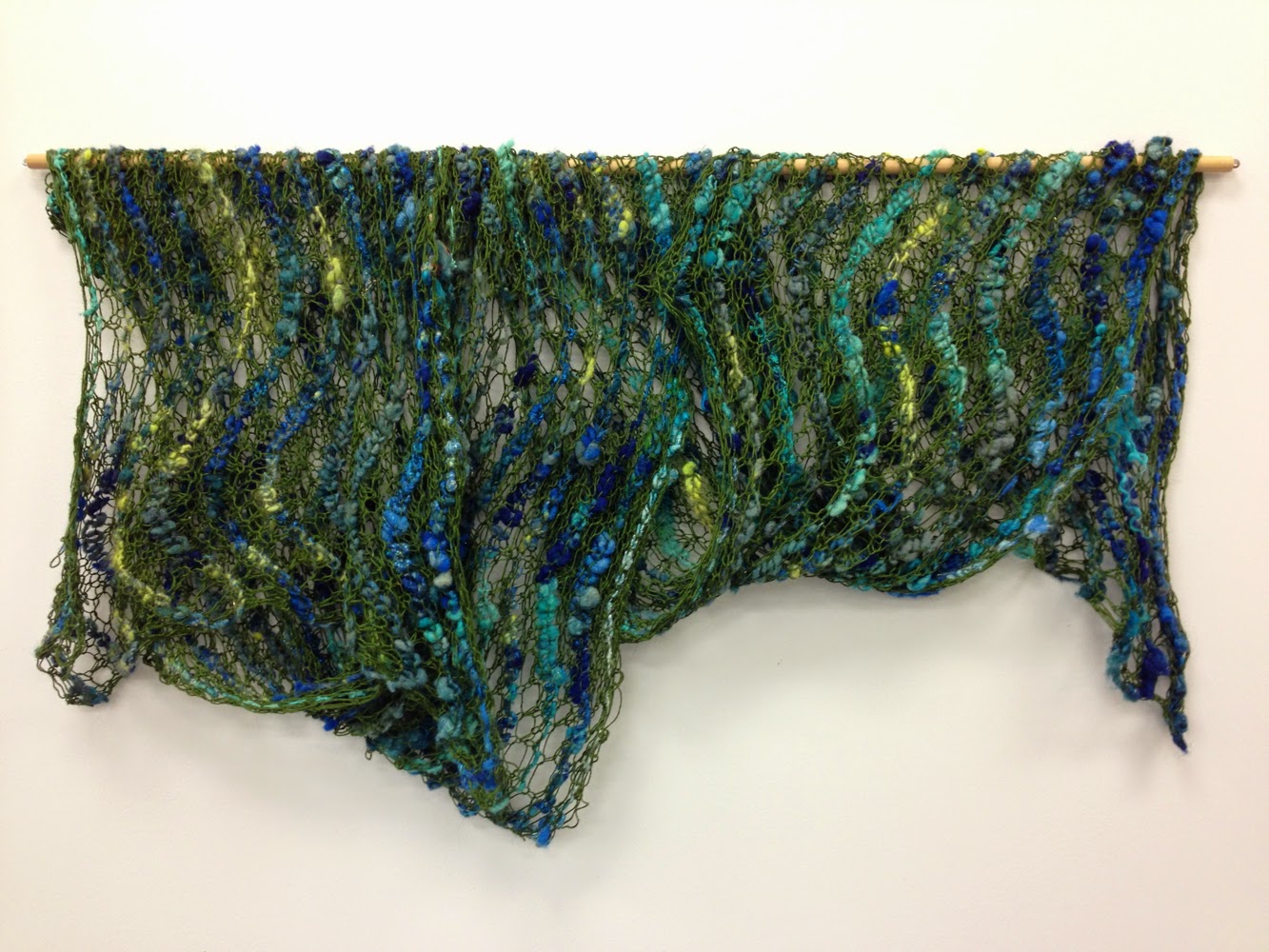 I foolishly forgot to mention that in conjunction with Southeast Fiber Forum, I have work on exhibit at Arrowmont School of Arts and Crafts in the Geoffrey A. Wolpert Gallery. If you happen to find yourself near Gatlinburg, Tennessee this weekend, please drop in to see a full array of fiber arts in the gallery. A better peek is on their website here.
Posted by Jolie No comments:

Making Treasure Out of Trash 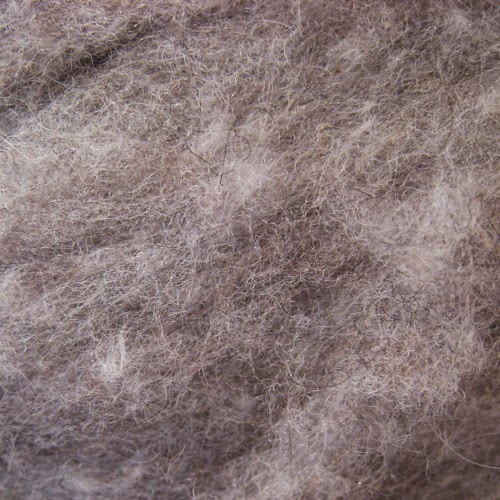 The spinning wheel had been idling for about a month. I decided to go to spin night at The Whole Nine Yarns, so I just grabbed some fiber as I scurried out the door. I purposely grabbed something I didn't want to think much about.

Well, I started to spin and wondered why I had even purchased this fiber. I bought it in Maryland. It was locally grown. The fiber is 70% Dorset and 30% angora. It is soft. It was undyed, so the color of dirty dishwater. And the batt was, well, not something that's going to win any awards. It had a lot of neps. What the batt most reminded me of was the galactic dust clouds from which new stars form. The price was good. I do recall chatting with the owner. I must have bought this thing just to be nice, possibly thinking that $15 for 30% angora would surely be worth it.

Obviously, this was not going to be a worsted yarn. So, I spun it woolen. I just accepted that this was going to be a textured, slubby yarn. I spun it onto three different bobbins, then plied it to produce a surprisingly springy woolen yarn. This is a very loosely plied yarn, with a twist angle of only about 10°. Not too bad. The color, however, was still unappealing.

Fortunately, I have been accumulating a small stash of Jacquard dyestuffs.

When I wound the skein off the spinning wheel, I was able to figure length. From that, I decided to divide the skein into five sections. I wound each section on my warping board, putting a cross in the center of each section. Crossing threads as you wind them is a trick used by weavers. There is a limit to how much threads can move -- and therefore a limit to how much chaos they can create -- if they cross each other and that cross is secured. I tied off the cross of each sections, plus I tied each section at both pegs. Yes, that's 15 ties. It was worth it.

I was able to dye each section a different color. I'm still learning, so the dye isn't even. The transitions between colors also leave a little to be desired. And I got a little blue in the yellow, turning it more chartreuse. Since the section next to the yellow was also chartreuse, I over-dyed that section another day with sky blue to make that part more green. In the end, I have a skein with 60-yard sections that progress from purple to pink to green to chartreuse to turquoise. (In the photograph below, I've folded the skein back on itself.) 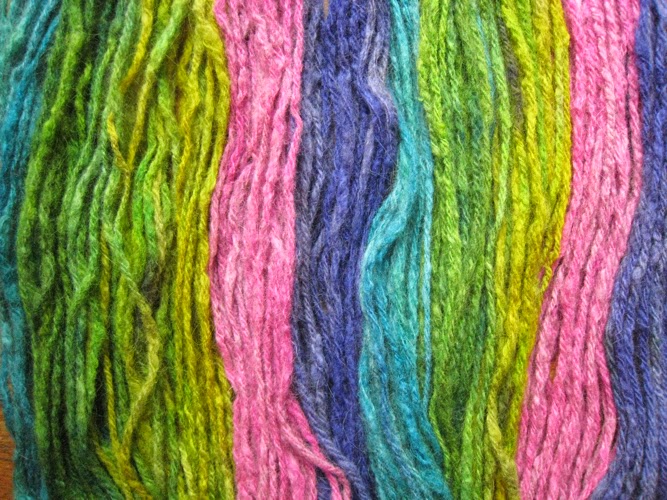 Conclusion: 300 yards, long-print, soft, plump woolen-spun in a light worsted or dk weight. I think that's worth its space in the stash.
Posted by Jolie 1 comment: