What Do You Do with a Torn-Up Afghan?

Although I have blogged very little this summer -- it is, after all, not a good idea to blog and drive on the interstate at the same time -- I did manage to mention that the Marietta Museum of Art would be having a significant yarn installation. I also managed to knock out a Muppet-fur hex-mesh net to donate to the cause.

The installation has been up for nearly two months. Of course, I've been running around so much that I haven't had time to stop and check it out. Until yesterday, that is.
The installation covers the stair rails as well as the large columns on the front of the museum. I love the patriotic swag over the door. You can see that some of the elements are old afghans that have simply been whip-stitched together. When you get a close look, some of the pieces are torn or faded or in some way damaged. But when combined with other items, this conglomeration from the island of misfit yarn projects becomes a great installation. 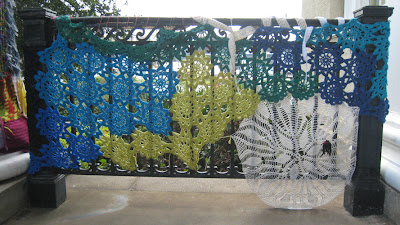 One of the side rails on the porch is covered with crochet, including the charming detail of a yarn spider using a doily as her web.
I was thrilled to see that the Muppet-fur hex mesh ended up on one of the center two columns!

There are lots more details to see in person, including four more columns, another porch rail, and lots of swags on the ceiling.
Posted by Jolie 1 comment: