The experiment with Jacquard acid dyes taught me one thing quite clearly — acid dyes are not great on Texsolv. I should have known this already, as I know acid dyes work on animal fibers (wool, silk) but not on plant fibers (cotton, linen). While acid dyes work on nylon (think sock yarn), they aren't great on polyester. Texsolv heddles and cords are polyester.
So, maybe the answer was to find a dye that works on polyester?
Of course, I started by looking at The Woolery, Paradise Fibers, Yarn Barn of Kansas, Susan's Fiber Shop, Earth Guild, and other usual suspects. Not a lot of luck.
It turns out, the answer was almost in my own backyard about three miles away at Hobby Lobby and WalMart.
Let me preface this by saying I rarely go in either of these stores. In particular, I probably hadn't been in that super WalMart in close to a decade. I'm almost surprised the bank didn't call to ask if my debit card had been stolen after I shopped in both places the same week. They both carry Rit DyeMore, although in different colors. I bought super pink, apricot orange, daffodil yellow, peacock green, Kentucky sky, sapphire blue, and royal purple. 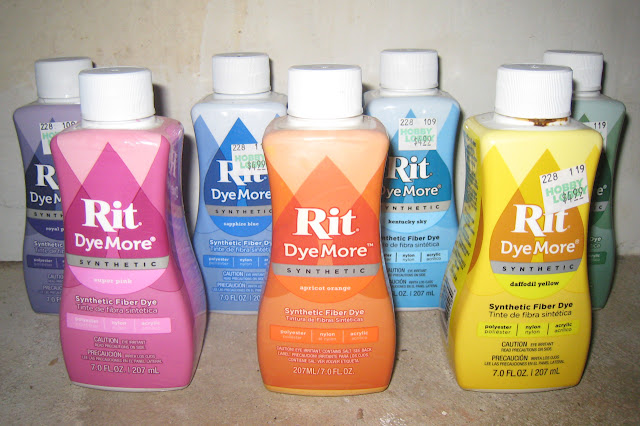 Apparently, DyeMore is a relatively recent product. Rit dye is an old standby going back decades. With the rise of fast fashion and convenience fabrics, many (most?) Americans are purchasing clothes made from man-made fibers. Traditional Rit dye isn't optimized for those fibers. But DyeMore is specifically made for synthetics such as polyester, acrylic, and nylon.
I reset the heddles by giving them a good soak overnight, to remove as much of the Jacquard acid dye as possible. I went to my local Goodwill store and bought a small saucepan for a few dollars. I marked the handle clearly with "dye pot not food-safe." Then, I followed the directions on the bottles. (Basically, simmer in water just below boiling with a little dye for about 30 minutes. See the official Rit YouTube video here.) The yellow took a little time to strike. The purple and blue struck almost immediately — I could barely pull the heddles out in time to prevent them from becoming darker than I wanted.
I used some of the colors straight. Others, like the green, I shifted by adding yellow, as I wanted a more yellow-green than a blue-green. Ideally, you want not just a variation in hue between adjacent shafts but also value.
The final result is very pleasing! 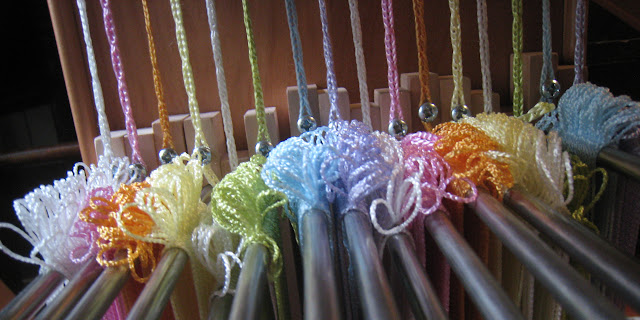 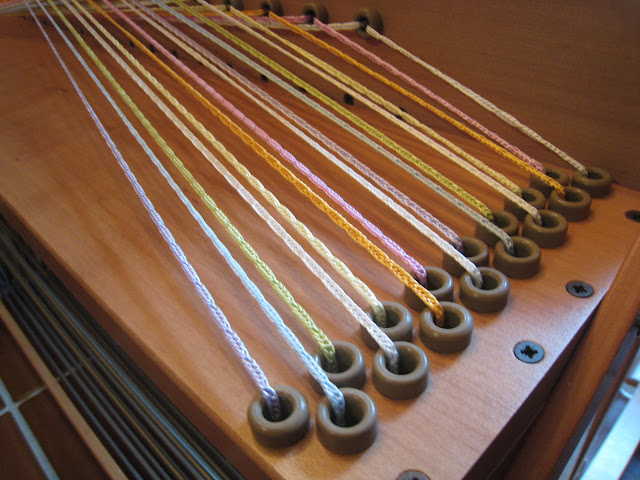 I haven't yet found time to dress my loom and weave, but I'm looking forward to it. And with the shafts and the heddle cords dyed-to-match, I should be able to stay on track just by following the color-coding. If this works as I expect, I can use the ample leftovers to dye my 8-shaft loom.
Posted by Jolie